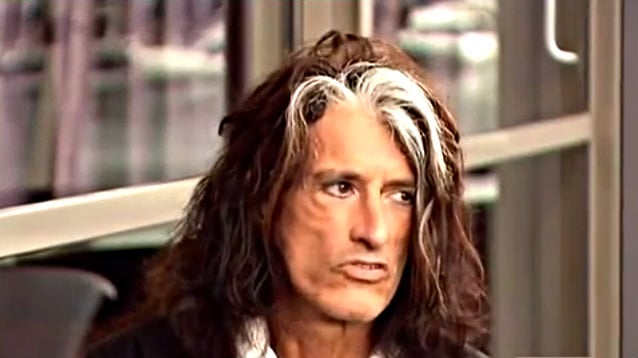 AEROSMITH guitarist Joe Perry has told RollingStone.com that fans should not expect a new studio album from the band anytime soon. "Our contract to Sony is fulfilled and we're free agents right now," Perry. "We're trying to figure out what that means. I don't even know if making new albums makes sense anymore. Maybe we'll just release an EP every six months. I don't know what the future looks like."

Perry blamed some of "Music From Another Dimension!"'s problems in reaching a bigger audience on both music and film business politics, telling RollingStone.com: "I'm obviously disappointed it didn't work out the way it was supposed to. But on the other hand, once a record is out, it's out forever. Maybe in two years someone might hear a song off it and go, 'What was that song? It should have been on the radio.' And it might hit a wave again."

Perry previously told Classic Rock magazine about the CD: "There is some ass-kicking stuff on that record, but there's also some stuff that, frankly, I'd rather we had left off. There were two big setbacks beyond our control. The president of our record label left three weeks before our record was released, and it got tossed in the bin. We'd been told that the lead song, 'Legendary Child', was going to be in the 'G.I. Joe' movie, and Paramount would put literally millions of dollars into the record."

Perry remembered the moment the band knew that the floor had fallen out from under them. "We were in the limo on the way to the TV studio to play the song on 'American Idol' when we learnt the movie was delayed by six months," he said. "I still feel the album didn't get to have its day in the sun."

Perry said that even taking their already 40-year-career into account — there's no reason that AEROSMITH can't be rocking onstage for decades still to come. "I think that the band has to look at what it takes to do this gracefully," he said. "There's no reason why the band can't keep playing until we can't walk. There's just no reason. You just have to know that you can't do certain things anymore. Y'know, you can't do somersaults on stage, you can't do, y'know, swing from ropes. But there are other things you can do that are just as entertaining — like sing, play."