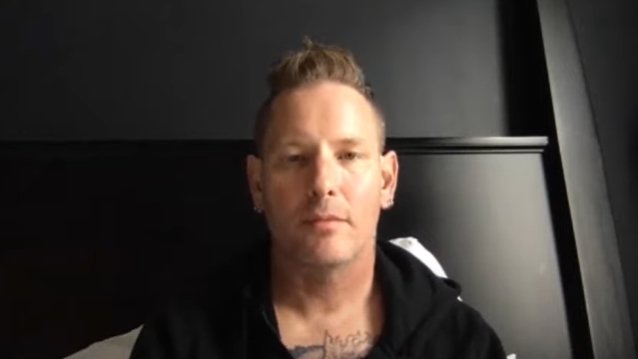 COREY TAYLOR: Playing ALICE IN CHAINS' 'Would?' With JERRY CANTRELL Was 'Probably The Highlight Of My Life'

In a brand new interview with "The Eric Zane Show", SLIPKNOT frontman Corey Taylor was asked what his "favorite cover song of all time" is to perform. He responded (as transcribed by BLABBERMOUTH.NET): "That's tough, man, because I am a rabid lover of doing covers and whatnot, especially in the right song and the right register — you're not singing outside of it — and you get the right group of people. Or doing a cool acoustic version of one of them. I'm hard pressed to [pick one]. I will say, obviously, one of my favorite songs of all time is 'Would?' by ALICE IN CHAINS, and I got to play that with [ALICE IN CHAINS guitarist/vocalist] Jerry Cantrell one night at a CAMP FREDDY show many, many moons ago. And it was probably the highlight of my life. Because he wasn't even gonna play, and then some people talked him into jumping up and playing it. And I was just, like, [makes wheezing sound]. This is my moment.' It's still to me one of my favorite, favorite moments."

Taylor previously praised ALICE IN CHAINS during the question-and-answer portion of his December 2021 appearance at Jo Ann Davidson Theatre at the Riffe Center in Columbus, Ohio. When asked to name his favorite of the "big four" Seattle grunge bands — SOUNDGARDEN, ALICE IN CHAINS, PEARL JAM and NIRVANA, he responded: "It has to be ALICE IN CHAINS. ALICE IN CHAINS, to me, is one of the greatest rock bands that ever was. And I don't just mean that from a grunge standpoint or metal or anything like that. They revolutionized so much musically and they inspired me to change the way I write music. I mean, full stop, period, the end of sentence. [Late ALICE IN CHAINS frontman] Layne Staley is still one of the greatest fucking singers that ever lived. Now, that is not a reflection of the demons that he had to fight, obviously, and that's everything to do with his talent. He just made it look so fucking easy, and he could sing anything, he could write anything, and the shit that he was writing about was killing him, and yet we loved it. To me, that was the greatest baring of the soul that I ever listened to. And if you need any more proof of that, all you need to do is listen to 'Nutshell'. It's one of the greatest songs ever written. And that's not even my favorite ALICE IN CHAINS song. My favorite ALICE IN CHAINS song is 'Would?' Full stop. That song is fucking incredible. But 'Nutshell' is such an outpouring of trying to share with you the darkness that's in his heart. And even though you're hearing it, it's so light, you're just, like, 'Fuck. Where is he?' And we never knew. And that's the great tragedy of people like Layne. It's not just Layne, obviously; there's so many people that came from that generation of artists. The pain they dealt with — some of them won, some of them didn't. But the great thing is that we can listen to their music and it can help us get past our own pain. And there's probably not a day that goes by that I don't listen to ALICE IN CHAINS. It's still just that good. And the fact that I know those guys now is just icing on the cake. It's rad to be able to hang out with your favorite band."

Back in 2015, Taylor said that he "would love" to collaborate with Cantrell. He said: "We're really good friends. I've known those guys for quite a while, and ALICE IN CHAINS is one of my favorite bands of all time. I would love to create something cool and dark with him, and just have fun with it. So if I had a chance to, man, I would totally be down with that."

This past February, Taylor released a solo album of covers and acoustic recordings, titled "CMFB…Sides", via Roadrunner Records. "CMFB…Sides" opens with a rendition of METALLICA's "Holier Than Thou" and also features covers from DEAD BOYS, Eddie Money, RED RIDER, KISS and JOHN CAFFERTY & THE BEAVER BROWN BAND.