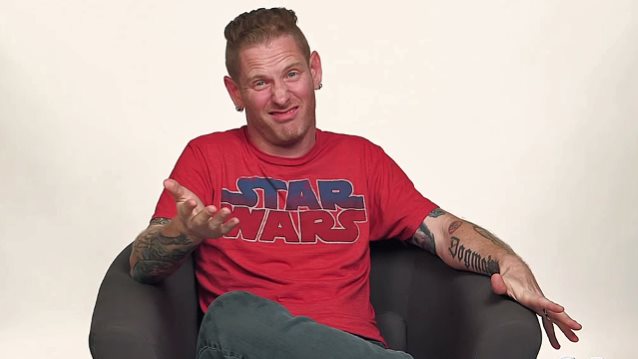 SLIPKNOT and STONE SOUR singer Corey Taylor says that all the hoopla surrounding his recent dressing down of rapper Kanye West is "ridiculous."

In an interview with Music Choice conducted earlier this week, Taylor slammed West for claiming to be "the greatest living rock star on the planet," saying: "Kanye, you are not — not — the greatest living rock star of all time. The fact that you had to tell people that kind of says it all. You remind of the guy who brags about pussy. They never get as much as they brag about. Stop it. [Slaps wrist] Stop it!"

Taylor's video message has since gone viral, having been seen nearly three million times on YouTube in three days.

The SLIPKNOT frontman spoke about the attention the clip has been getting during an appearance on Thursday's (July 9) edition of the "Opie Radio" talk show. Taylor said: "[Kanye] was playing Glastonbury, which, if you're not familiar with that, is Coachella [the annual California festival] with a different accent. And he's on stage, and he's doing a little spaceship thing on stage… It's very strange-looking. And he goes, 'You people are witnessing the greatest living rock star of all time,' and then proceeds to mess the words up to [QUEEN's] 'Bohemian Rhapsody' — in England! In England! Are you kidding me? Unbelievable, dude. And so, of course, I'm on Music Choice, and they asked me about it, so I just kind of cut this PSA [public service announcement] where I'm just, like, 'Look, just stop.'"

He continued: "It's kind of precious, 'cause everybody's, like, 'Well, you know, Kanye's got way more Grammys than SLIPKNOT has albums.' And I'm, like, that says it all. To get a Grammy now is like getting a Teen Choice award. Who cares? It's ridiculous. And by the way, I have one, you jerks. At least one."

Taylor went on to say: "The thing today, though… I woke up, and now the academics are in on it. Like, there's all these blogs on it. Like, 'Well, Corey Taylor, actually, kind of is the greatest living rock star, and this is why…' blah blah blah. And this one woman — she's precious to me — she was, like, 'Yeah, but Corey's much better at his gig than Kanye West is.' So… So what? Who cares if, like, you can do the math and show me where he is? He still sucks."

Asked if he was loving the attention his Kanye West rant had generated, Taylor said: "No! God no! Because it's so ridiculous, man. Here's the thing: I've written three books, I've sold millions of albums, I'm in two different bands, I'm in movies and shit. And this is what it took? This is what it took? Me talking about some hardon. I'm, like, you've gotta be kidding me, man."

He continued: "That's the problem. That's one of the reasons I wrote [my new] book ['You're Making Me Hate You'] — because everything has flipped on itself. It doesn't take anything to be famous anymore. It used to be you had to have talent, you had to have a work ethic, you had to have something creative and special to be able to be famous. Now, apparently, you come out of the right cooch, you get a reality show, [and] you're famous. I'm, like, really? God, I was born in the wrong fucking decade, man."

In an interview with U.K.'s Sunday Times, Kanye defended his comments. He said: "For all haters, I'm not saying I'm Da Vinci, but I feel it's right for any human being to compare themselves to anything.

"People get really uptight about my comparisons, but I'm an extreme speaker, and I speak through comparisons."

"You're Making Me Hate You" was released on Tuesday (July 7) via Da Capo Press, a member of the Perseus Books Group.

Taylor is promoting the book with a combination of bookstore events and a solo tour which are one-of-a-kind shows featuring readings from the book, acoustic performance, and audience discussion.