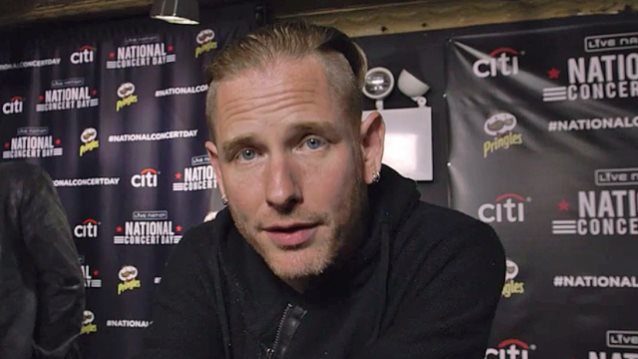 COREY TAYLOR Talks Next SLIPKNOT Album: 'We're Trying To Think Of Where We Can Go Musically'

Taylor told radio host Full Metal Jackie in a separate interview that the band's music will have to evolve. Asked about the group's musical progression, Taylor said he and other key members have been discussing their future, explaining: "I mean, this band has always tried to find the path less traveled. We've always tried to expand the range of the music that we're making and find new ways to speak our piece, find new ways to kind of push our agenda and our message. And it's getting to the point where, at some point, the music will have to evolve."

He continued, "We've done really great things to broaden our musical horizons. At the same time, though, at some point it's gonna have to twist and it's gonna have to change even more... Will it still feel like SLIPKNOT? Absolutely. We write a certain type of music, even though that music may be very, very eclectic and varied, we still write what I consider SLIPKNOT music. But at some point, that will have to evolve and become something new, because our message will have to change."

SLIPKNOT has hinted that its next studio effort could be a double concept album. The group's last set, ".5: The Gray Chapter", came out in late 2014.

SLIPKNOT will head out on a massive North American tour with MARILYN MANSON and OF MICE & MEN this summer, starting on June 9 in Salt Lake City.