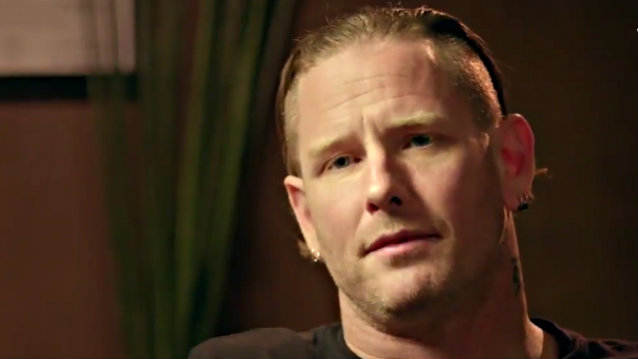 SLIPKNOT and STONE SOUR singer Corey Taylor will "confront the traumas of his past, including abandonment and attempted suicide," during an appearance on this coming Monday's (May 22) episode of Viceland's new show "The Therapist".

A preview clip is available below.

In the program, which premiered on May 8, Los Angeles-based licensed therapist Dr. Siri Sat Nam Singh sits down with some of today's most influential musicians and artists to take a deeper look into their psyches, their pasts and their presents to discover what makes them tick. He leads them through compelling discussions, inviting them to look at how they've faced some of the most formative, troubling or difficult experiences from throughout their lives.

Each of the artists who sit with Dr. Siri quickly realize they are in the presence of a man who is knowledgeable, deeply sensitive, compassionate and highly intuitive. This fact alone provides them with an unparalleled level of comfort allowing them to truly be a part of the experience.

Aside from a cameraman, there was absolutely no one else in the room throughout each shoot. There were no "re-takes," no "re-shoots," no "producing." Each artist was fully immersed in a full-length therapy session which enabled Dr. Siri to truly engage them and break down the emotional barriers and walls we all carry.

There has long been a stigma surrounding mental health care. Dr. Siri Sat Nam Singh and his patients take steps forward to normalize a process which they feel all people should be able to take advantage of, asking for help and trying to truly understand oneself.

Back in 2014, Taylor posted a four-minute video in conjunction with the You Rock Foundation in which he discussed his struggles with depression, homelessness and suicidal feelings, and how he overcame them with the help of music. Taylor said in the clip: "When I hit 17, I kind of started wrecking myself, and started lashing out at a lot of people… I was homeless, off and on, for about two years. And I didn't know what I was gonna do, I didn't know how I was gonna do anything with my life."

He continued: "It was a really, really dark time for me. I definitely got to the point where I was ready to end it all. I had the razor in my hand and I started cutting myself. But it was a pressure valve kind of situation, where it wasn't like I was going to end it, I just needed to feel something real to snap me out of it."

Taylor admitted that he swallowed a "bunch of pills" and ended up in the hospital, adding, "That was probably the lowest moment of my life, because I'd done it to myself. The only thing that really helped was writing. It felt like when I was writing I could work it out and really be able to get my head around it."

Taylor also tried to commit suicide in 2003 by attempting to jump off a hotel balcony while struggling with alcoholism. He told The Pulse Of Radio a while back about how he finally got sober. "It was really bad, man," he said. "I mean, there was a solid block of about two years that I was basically drinking every night, and I didn't even realize how bad it was until my wife kind of grabbed me and said, 'Look, you've got to figure it out. If you don't figure it out, we're not gonna be together.' And I quit, that day. And I haven't looked back."