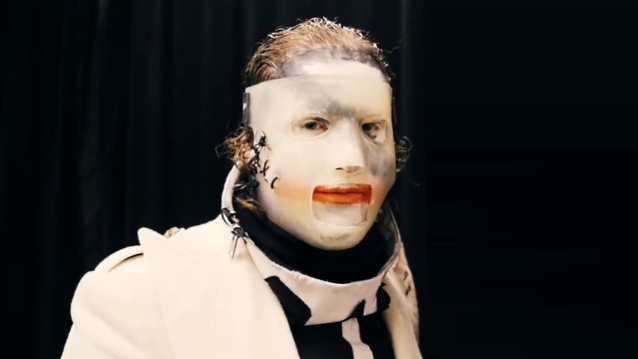 SLIPKNOT frontman Corey Taylor says that he would "probably" take a page out of the SEX PISTOLS' playbook by declining to be inducted into the Rock And Roll Hall Of Fame if his band was to ever get the nod.

When the SEX PISTOLS' induction was announced in 2006, lead singer Johnny Rotten (né Lydon) sent along a hilariously blunt (and grammatically incorrect) handwritten letter in which he compared the Hall to "urine in wine" and added: "Next to the SEX PISTOLS, rock and roll and that hall of fame is a piss stain. Were [sic] not coming. Were [sic] not your monkey." Later he said: "I can't accept any accolade from them — unless they offer me a shitload of money."

The prospect of SLIPKNOT being inducted into the Rock Hall was raised during Taylor's recent interview with Andy Hall of the Des Moines, Iowa radio station Lazer 103.3. When Andy suggested that fans had the power to get SLIPKNOT into the Hall and "right all of the wrongs of the past by also inducting JUDAS PRIEST and SCORPIONS and a bunch of other bands that deserve their spot," Corey said (as transcribed by BLABBERMOUTH.NET): "First of all, I don't care about that Hall, 'cause I think it's a pile of garbage. They don't honor anything except pop music, really, and they only really induct real rock bands when they have to cave to pressure. They disrespected so many bands over the past by putting others in before the ones that actually deserve it, that I would probably go the way of the SEX PISTOLS. I'd be, like, 'Your Hall is a sham. I don't care if I'm a part of it or not. You have no idea what the spirit of rock and roll is actually about. So take this and shove it up your you-know-what.' So, that's basically where I'm at. And, obviously, I'm not getting any brownie points, and I probably will never be nominated, but I don't really care."

Taylor went on to say that he doesn't think SLIPKNOT fans "would actually care if we were in [the Rock Hall] to begin with. It's not gonna stop us from playing," he said. "I mean, think about it: football players, they retire and then they go [into the Football Hall Of Fame]. We're still going. Why would I wanna go in the Hall Of Fame if we're still killing?"

This is not the first time Taylor has critized the Rock And Roll Hall Of Fame. Back in May 2016, the singer was asked by Loudwire Nights for his opinion on comments Gene Simmons taking issue with hip-hop acts — and other non-rock artists — being inducted into the Rock Hall. He responded: "I see what Gene's saying, and, you know, I'm old-school guy as well; I get it. But at the same time, the more I look at what N.W.A. did, man, I mean, they influenced me, and I'm a rock and roll guy. So how do they not deserve to be in there? To me, bands like that, bands like RUN–D.M.C., it's a different type of band, but it's a band, man. I mean, that's straight up. So I can see both sides of it."

He continued: "I have bigger problems with the Hall Of Fame than some of the people who have gone in. Mine has more to do with the fact that until this year, CHEAP TRICK and DEEP PURPLE weren't in. That, to me, is disrespectful on a whole other level. Does N.W.A. deserve to be in. You're goddamn right they do. But did CHEAP TRICK and DEEP PURPLE deserve to be in years before they got in? You're damn right they did. So that whole organization needs to figure out who they're gonna honor and when, because there are still bands right now who aren't in that should be."

Two years earlier, Corey called out KISS over the public feud between the current bandmembers, two original ex-members and the Rock And Roll Hall Of Fame over the group's long-awaited induction into the Hall in April 2014. Taylor said: "On one hand, you're stoked being a KISS fan, but on the other hand it's, like, 'Can you guys just put aside your petty issues and realize that without one another you wouldn't have been able to do this? Can you just set stuff aside and do one show for the fans of the original lineup again? And then you never have to see each other again?'"

KISS co-founders Simmons and Paul Stanley firmly rejected the idea of performing at the induction ceremony with former founding members Peter Criss and Ace Frehley, despite the Hall's and fans' wishes.

Taylor added: "Without [Frehley and Criss], the other two guys wouldn't be where they are! And that's just me layin' it straight! I might not ever get a kind word from anybody in that band anymore. But I think it's petty and I think it's ridiculous! Figure it out! Show respect, because sometimes it's not about you, it's about the fans."

Another artist who famously refused to be inducted into the Rock Hall is GUNS N' ROSES singer Axl Rose. In an April 2012 letter to the Hall, band fans and "to whom it may concern," Rose listed several reasons for not attending his band's ceremony in Cleveland, including a feeling that the Hall does not respect him. In declining his own induction, he added: "I strongly request that I not be inducted in absentia and please know that no one is authorized nor may anyone be permitted to accept any induction for me or speak on my behalf."