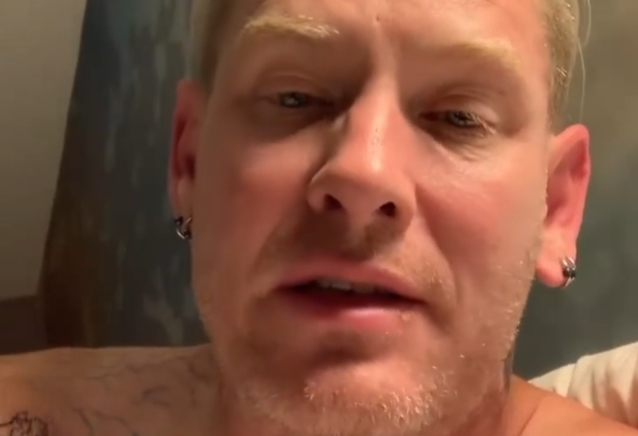 Corey Taylor is "doing well," two days after he contracted a breakthrough case of COVID-19 that made him "very, very sick."

The 47-year-old SLIPKNOT and STONE SOUR singer was forced to call off his appearance at a Michigan pop culture convention this weekend after testing positive for the coronavirus. Taylor first shared the news in a video posted Friday on the Facebook page for Astronomicon, the event where he was scheduled to appear Saturday and Sunday.

Earlier today (Sunday, August 22),Corey's wife Alicia Taylor, who is a professional dancer and a member of the all-girl dance group CHERRY BOMBS, took to her Twitter to write: "Wanted to give you guys an update: Corey is doing well and thanks everyone for the sweet thoughts and messages. Ready to get him home as soon as it's safe, so I can take care of him! He (very luckily) hasn't lost his sense of taste or smell so I send him stupid amounts of snacks, hydration powders, and yummy desserts."

Taylor completed the latest leg of his solo tour in support of his 2020 album "CMFT" Thursday night (August 19) in Denver.

In a recent interview with Consequence Of Sound, Taylor lamented the politicization of the coronavirus vaccines, saying: "The fact that [vaccines] have been demonized, almost to the point of these gnarly conspiracy theories, no wonder why people are afraid of it — because they're listening to the wrong people."

He (very luckily) hasn’t lost his sense of taste or smell so I send him stupid amounts of snacks, hydration powders, and yummy desserts. 🖤