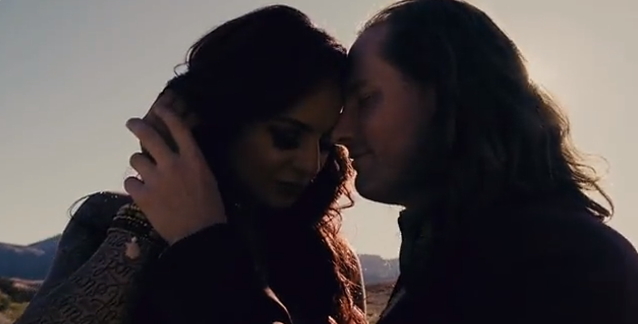 Corey Taylor's wife has shared a video of their wedding memories to celebrate their second anniversary.

The SLIPKNOT and STONE SOUR frontman married Alicia Taylor, a professional dancer and a member of the all-girl dance group CHERRY BOMBS, in October 2019 in their hometown of Las Vegas, Nevada. The reception was reportedly held in their home and was attended by a number of their friends and fellow musicians, including Roy Mayorga of STONE SOUR, Kyle Sanders of HELLYEAH, and Lajon Witherspoon of SEVENDUST.

Earlier today, Alicia uploaded the one-minute clip to her Twitter and captioned it with the number "2" alongside a "heart on fire" emoji.

Corey also commemorated the anniversary by sharing a wedding photo and writing in an accompanying message: "2 years. 50 to go. Happy Anniversary, my Everything. L'adorilust."

Last year, Alicia recounted a hilarious incident that nearly derailed the couple's wedding day. She took to her social media to share a photo of the iconic 1960s Shelby Cobra vehicle she and Corey rented for the occasion, and she revealed how car trouble almost ruined the end of one of the important days of their lives.

She wrote in a series of tweets: "This photo is from our wedding day. We rented this car to take photos with, and it sounded like a good idea, until the end when everyone left. All that remained was CT in this car, and myself in mine (we arrived to the site separately).

"Valley of Fire was now closed, it was getting dark, and we had dinner reservations in a little over an hour- perfect amount of time to drop this rental car back and make it to our favorite romantic restaurant and continue our dream day.

"But the universe had other plans," she continued.

"As I followed CT in the little sports car down the longgg lonely road leaving Valley of Fire, I noticed he was going slower, and slower... until the car let out a sound of defeat- a pathetic little 'put put put' - and came to a complete stop in the middle of the road.

"Before I could pop my head out of the window the ask if he was okay, I saw him grasp and attempt to shake the steering wheel, as he screamed, 'FUCKKKKK!!! YOU STUPID PIECE OF SHIT! AHHHH!!!' into the deep dark abyss of the desert.

"No cars in sight. No lights. Pretty sure I saw a flock of birds take off as the sonic waves of his echoes hit their direction. Then silence. Oh man.

"But! Aha! We looked a little further into the distance and saw a teeny tiny glow of what looked to be a Chevron sign. Yes!

"We couldn't leave this 1965 or 68 or whatever Cobra in the middle of the road, so he popped that sucker in neutral, and we - he in his gorgeous suit and myself in the one thing I splurged on for this wedding, a designer dress - pushed the car off the road and to the side.

"We must've looked so ridiculous," she added. "My dress was now completely covered in dirt. I ripped it with my heel while trying to dig my feet into the ground as I shoved this damn vehicle. Corey is also covered in dirt and sweating like he's attending a southern Baptist church in July.

"We hit the Chevron at the end of the road, fill up a couple plastic gas cans, and head back to the car towards Valley of Fire.

"I watch from my car with the headlights shining on CT to give him light- and I see him attempt to fill the car with gas. I check the clock. Shit.

"I call Nobu and tell them that we are not going to make our reservation. They are understanding and push it back an hour. I glance up at CT, who is pouring gasoline as best as he can, except the nozzle broke and he is now drenching the side of the car, and his pants... in fuel.

"A couple more echoey loud expletives are sent into the universe, and I jump out to assist," Alicia wrote. "He smells like someone on a pit crew. He gets the other cans in the tank, tries to start the car- dead. Nothing. Battery? Starter? What could it be?

"We sit in my car to take a breather. It's the first time we have stopped and REALLY looked at one another since this clusterfuck began.

"And we laugh. Hysterically.

"Tears are streaming down my face from laughing so hard, and in that very moment, I knew he was my perfect match.

"Wrap up: waited another hour and a half to two hours for tow truck. Pushed our reservation during that time again but didn't make it. We were too exhausted and hungry to care, so we ate at a Thai place in the hotel we were staying at.

"The server looked at us with a raised eyebrow as we sat down in our gasoline and dirt covered fancy wedding getups, our hair disheveled, I had a burn on my leg from the exhaust. He probably smelled us before he saw us. 'Did- did you guys just get married?'

"So now we blew that first photo up REAL BIG and it's in our dining room.

"Moral of the story: Find someone that you can laugh with, especially when shit hits the fan. This can be a partner, a friend, a coworker... anyone. Find that person and cherish them."

Corey and Alicia began dating after the breakup of the singer's eight-year marriage with Stephanie Luby, whom he wedded in November 2009 (the couple had a daughter named Ryan). Corey was previously married from 2004 to 2007 to a woman named Scarlett, with whom he shares a son. The rocker also has a daughter from an earlier relationship.