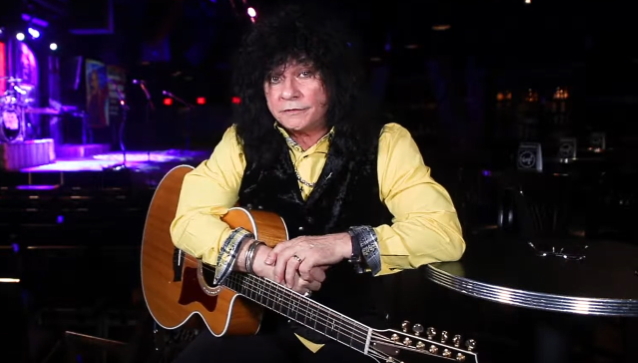 Former QUIET RIOT and current ROUGH CUTT singer Paul Shortino has railed against the federal and local vaccine mandates that have been implemented across the U.S. over the past few weeks.

The 68-year-old Shortino, who frequently "likes" tweets that amplify Republican talking points and that are derogatory to Democrats, discussed his stance on the issue during an October 5 appearance on Robby Lochner's YouTube livestream.

He said (as transcribed by BLABBERMOUTH.NET): "What's interesting to me is that when you have to bribe people to take something, you kind of wanna question it. Maybe it would be a good idea [to find out] why they want me to take this so bad.

"People have had different reactions from both sides of it," he continued. "People that have taken it have been cool. Some people have taken it — the jab or whatever. I won't call it a vaccine because you have to take a booster, and then you might have to take another booster. So it's kind of like a flu shot to me.

"I just found out I'm allergic to the flu shot, so every time I took the flu shot, I got deadly sick. I had to freakin' sing for eight and a half weeks [as part of the Las Vegas production] 'Raiding The Rock Vault' six nights a week. And I had walking pneumonia from the flu shot.

"I'm not in a hurry to get the COVID thing," Shortino added. "It might kill me. If the flu shot is doing this to me, who knows? I should probably be a little bit more informative in what's going with what they're giving people and stuff.

"But it's messed with a lot of people's lives. It's insane — it really is. With restaurants, bars, music…

"Is it right for the party? It's almost like we're kind of swinging that pendulum so close to Marxism to where they're in control of everything. It's pretty crazy. It's happening so fast.

"I'm 68," Paul said. "I never thought that at 68 I would see this stuff going on. And they're just testing the waters to see how many people will comply to whatever they want to do. And I think Americans need to stand up and start saying, 'Hey, wait a minute.'

"Doctor [Anthony] Fauci [the country's top infectious-disease expert] is actually selling candles. They made him almost like a God. And it's really kind of crazy.

"But who knows what's gonna happen?

"People need to speak up and say what's on their mind, if they can. They're trying to shut down those avenues for people to do [it]."

Two months ago, Shortino claimed that he beat COVID-19 by taking ivermectin, a cheap, widely available, anti-parasitic drug that has been touted by some on social media as a COVID-19 "miracle cure."

While there are approved uses for ivermectin in people, including for the treatment of some parasitic worms, it is not approved by the FDA for the prevention or treatment of COVID-19. The FDA says that you should not take any medicine to treat or prevent COVID-19 unless it has been prescribed to you by your health care provider and acquired from a legitimate source. Ivermectin is prescribed at very specific doses for some parasitic worms. It is not an antiviral drug.

This past February, before he got infected with the coronavirus, Shortino told the "Ouch, You're On My Hair" podcast and radio show that he was not concerned about contracting COVID-19. He said: "I'm not really afraid of it. I think [other] people are more afraid of it. I'm such a believer in the law of attraction that if you're not afraid of it, and you put out there that you're not afraid of it, I don't think you're gonna contract it. I know people that have contracted it who were so afraid of getting it. And then they just put it out there."

A Fox News poll released last month showed clear majorities of Americans back mask and COVID-19 vaccination mandates. 54 percent of people favor proof of vaccination in indoor spaces like restaurants and gyms while 66 percent said they favor businesses requiring masks for customers and employees. 67 percent said they support mandating that students and teachers wear masks in schools. According to the poll, which included interviews with more than 1,000 registered voters conducted between September 12 and 15, 56 percent of voters supported President Joe Biden's directive to companies with more than 100 employees to require proof of vaccination or regular testing.

COVID-19 vaccines have been studied in humans for more than a year now, and more than 185 million people have been fully vaccinated in the United States alone. There are several robust safety monitoring systems in place for these vaccines that can detect the very rare adverse events.