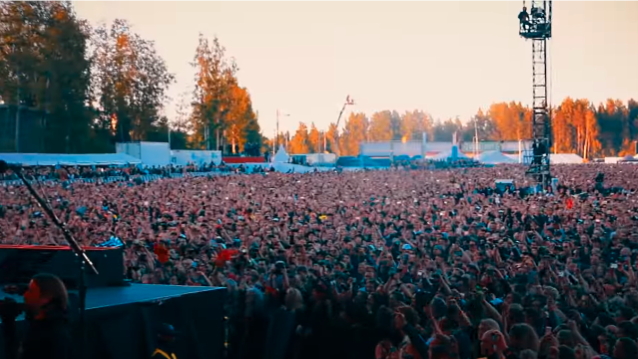 According to the Los Angeles Times, Los Angeles appears to be considering banning big gatherings — including concerts — until 2021 due to COVID-19.

"[L.A.] Mayor Eric Garcetti raised the issue during his weekly briefing Monday with a group of high-level staff from several departments, including Fire Chief Ralph Terrazas," reports the Times, citing an internal Los Angeles Fire Department e-mail. "Garcetti indicated during the conference call that 'large gatherings such as concerts and sporting events may not be approved in the city for at least 1 year.'"

Garcetti spokesman Alex Comisar confirmed the mayor's comments at the meeting. "The mayor was generally referencing studies of current and historical data and best practices for safely reopening our economy," Comisar said.

In a new interview with CNN, Garcetti said it "would be very difficult to see" large gatherings like sporting events or concerts resuming in the city before next year.

"It's difficult to imagine us getting together in the thousands anytime soon, so I think we should be prepared for that this year," Garcetti told CNN's Wolf Blitzer on "The Situation Room" on Wednesday.

"I think we all have never wanted science to work so quickly," he continued. "But until there's either a vaccine, some sort of pharmaceutical intervention, or herd immunity, the science is the science. And public health officials have made very clear we have miles and miles to walk before we can be back in those environments."

Other essential and small businesses would reportedly be "phased in over a period of time (6-10 months)."

Garcetti's comments come just a day after California Governor Gavin Newsom said "mass gatherings" such as sports events, concerts and fairs are unlikely to resume until there is herd immunity and/or a vaccine.

Public health experts have repeatedly expressed their concern that Americans are underestimating how long the coronavirus pandemic will disrupt everyday life in the country.

Dr. Anthony Fauci, the the head of the National Institute Of Allergy And Infectious Diseases and part of the White House's coronavirus task force, has said a vaccine may be 12-18 months away, but other experts said it could take even longer.

All the major rock festivals have either canceled or postponed their spring 2020 editions. Dozens of tours have been rescheduled, with many of them now set to commence in late summer or early fall.

A report from Pollstar shows that revenue from the touring industry could be down as much as $9 billion in 2020.