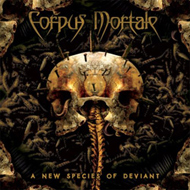 "We've been very busy writing new songs lately as well as booking shows. We're almost halfway with the material for our third album, and if everything works out as planned, we'll enter the studio sometime between September and November. We have a lot of shows coming up, among others two shows in Iceland and a couple of festivals next year, but not too many 100% confirmed dates so look out for show updates."

Songtitles set to appear on CORPUS MORTALE's next CD include "Feasting Upon Souls" and "Love Lies Bleeding".

The band released its second full-length album, "A New Species of Deviant", in September 2007 via Neurotic Records. The CD features the artwork of the label's in-house artist Joel Sta.