The Tampa Tribune has issued the following report:

Four people were stabbed — one of them fatally — during a brawl Thursday night (June 23) inside The Masquerade, a night club on Seventh Avenue [where CORROSION OF CONFORMITY and CROWBAR were performing], police said.

Tampa Police spokesman Joe Durkin said a "shoving match" started between two women on the club's dance floor just before 11:30 p.m. The tussle escalated when others tried to break the women apart. That's when a bald man with a knife began stabbing patrons, Durkin said.

Then people fled the club, Durkin said, the suspect included.

Of the surviving victims, one was in critical condition at the hospital this morning, one was in fair condition and one was treated for minor injuries and released, according to police.

Durkin would not release the name of the deceased until next of kin is notified.

Police detained at least three people and hauled them from the club in handcuffs this morning, but Durkin said police were still looking for the suspect. He's described as white, about 28 to 30 years old, 5 feet 8 inches tall, 150 pounds, with tattoos.

Watch a Channel 8 TV news report on the incident at this location (Real Player required). 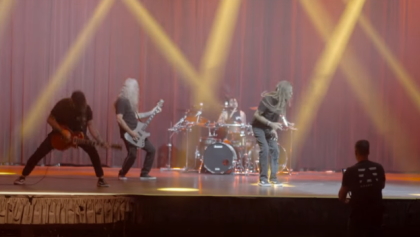