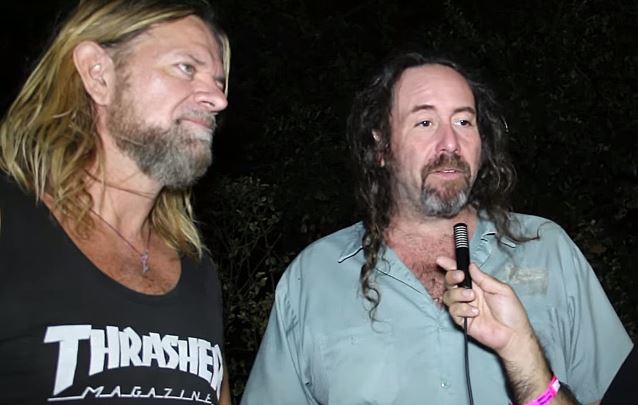 CORROSION OF CONFORMITY's PEPPER KEENAN On New Album: 'We're Pretty Amped To F**king Get On It'

Jimmy Cabbs conducted an interview with CORROSION OF CONFORMITY members Pepper Keenan (guitar, vocals) and Woody Weatherman (guitar) at this year's Knotfest, which was held October 24-25 in San Bernardino, California. You can now watch the chat below. A couple of excerpts follow (transcribed by BLABBERMOUTH.NET).

On the reunion of the four-piece lineup of CORROSION OF CONFORMITY:

Woody: "We wouldn't do it if we didn't feel it. There's no way we would jump out on stage if we weren't feeling it. You can't fake the shit we do. We do it and it's gotta be real, you know."

Pepper: "We had discussed doing this and we had talked about it for a couple of years. We went to Europe, and we played in Europe, and then we went back two more times in Europe over this last summer. So we've been there three times. We did one thing, a couple of runs, and we got invited back. And then they invited us back again — like last minute: 'We want you guys to play at a festival.' A whole new can of worms was opened up here. But the energy was there, and we knew it was there. And we're playing great, man. It's like riding a fucking tricycle of something."

On the Pepper-fronted version of C.O.C.'s upcoming first full-length record since 2005:

Pepper: "We just signed a record deal with Nuclear Blast, so we're using all these opportunities just to gel and play, and we keep getting wonderful opportunities to do it, and it's been fantastic. So now we're gonna put our dick back on the chopping block and create a new record that's gonna be up to the standards of that era stuff. And I don't take it lightly. It's gonna be a lot of work."

Woody: "People expect a little bit. When it's time for a new C.O.C. record, they know it's that… We can't toss any fucking horseshit out there. It's gotta be the real shit."

On whether CORROSION OF CONFORMITY is feeling any pressure trying to come up with new music that stands up to the classic material:

Pepper: "The only pressure we've got is gonna be amongst each other. And I think we're very clear on what we need to do and how to kick it up a notch. There's a lot of new bands out there. But it's still gonna be based on songwriting and really, really sticking it in there and trying to do the right thing that we feel is cool. We can't be chasing what's hip or whatever now. We've gotta do what we do and kind of jump over that and kind of make it our own thing. I think at this point in the game, we're ready… We're pretty amped to fucking get on it."

Woody: "There's a couple of licks lingering around. We've been working on a few ideas and whatnot. There's a riff or two in our heads right now. We know what we're getting ready to do."

Keenan played his first full show with CORROSION OF CONFORMITY since 2006 on March 7 at Manchester Academy 2 in Manchester, England.