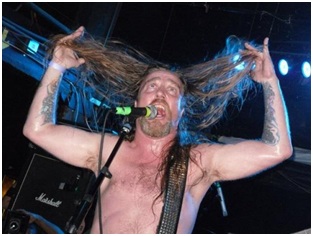 On Saturday, January 7, the metal community took another step in dealing with the tragic death of longtime GWAR guitarist Cory Smoot by holding the first of two events in a three-show schedule of shows designed to support the Smoot Family Fund and honor the life of this prolific artist, who died of a heart attack this past November at the age of only 34.

Cory had played the role of Flattus Maximus in the world's most infamous band for eleven years, as well as participated in many side projects, while at the same time producing and engineering tons of records at his always busy Karma Studios. In doing so he had become a treasured part of the local and national metal scene, and they turned out in force to both events, opening their hearts to Cory's family in a completely selfless display of solidarity, respect, and generosity.

Cory's widow, Jaime, who is pregnant with Cory's child, had this message for the fans: "I want to sincerely thank ALL the friends and fans for their amazing donations and support!! Thanks to Eve and Brent for organizing the events, to the businesses that contributed raffle prizes, and to the venues and bands for making the shows awesome!! You guys made Cory, the baby and me very proud!"

Show highlights included LAMB OF GOD lead singer Randy Blythe singing for thrashers CANNABIS CORPSE. Blythe was later joined by MUNICIPAL WASTE lead singer Tony Foresta in shearing off five years of hair from GWAR lead singer Dave Brockie's head, which was raffled off to a lucky winner but ended up everywhere. But the most stirring performance came from Cory's band mates MENSREA, who pulled themselves together for a powerful and emotional tribute to the life of this truly amazing man.

The show Saturday night at the Canal Club was also the CD release party for Cory's solo record, "When Worlds Collide", which will be coming out on Metal Blade Records soon. The next planned event is on Friday, March 16 when GWAR, MUNICIPAL WASTE, and GHOUL will play at the National Theater. All funds raised at the show will go to the Smoot Family Fund.

For those who can't make it and still wish to donate, they can do so here.