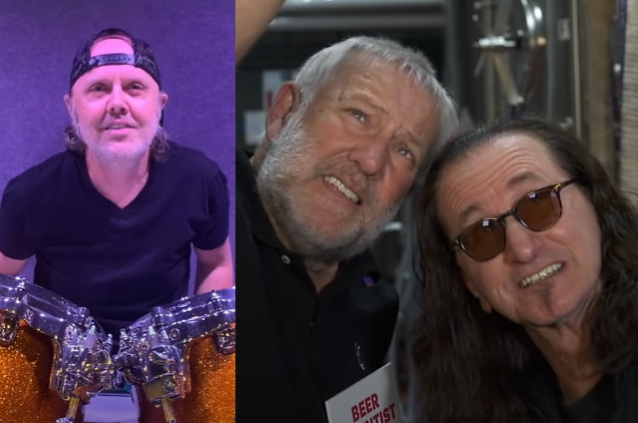 During an appearance on SiriusXM's "The Howard Stern Show" this past Monday (November 28),METALLICA drummer Lars Ulrich reflected on his participation in the Taylor Hawkins tribute shows in September. He said: "The one thing in this band is the four of us don't stray a lot. And I think a big part of the fact that METALLICA, 41 years in, is still as functional as we are is because we just haven't strayed a lot. Of course, Kirk [Hammett, METALLICA guitarist] has gone and done his solo stuff, and James [Hetfield, METALLICA frontman] did something with one of the Waylon Jennings kids a few years ago, and I've done one or two things, and [Robert] Trujillo [METALLICA bassist] goes back to SUICIDAL [TENDENCIES] occasionally and INFECTIOUS GROOVES, but we don't stray a lot.

"Dave Grohl [FOO FIGHTERS leader] called me three or four months ago and asked me if I would partake in the Taylor Hawkins tribute shows at Wembley and at the L.A. Forum, and, obviously, before he was done explaining it, I just said, 'Yes, Dave. I'll be there. Just tell me what you want and I'll show up with bells and whistles on."

Ulrich continued: "Straying outside of the METALLICA world is not the most comfortable thing for me. I think a big part of why we just love staying inside the METALLICA universe is because there's that safety in numbers, and we just support each other and have that thing. But playing with Grohl and the other three FOO FIGHTER guys, and then at Wembley we did, with Brian Johnson, the AC/DC singer, we did an AC/DC set, and it was so much fucking fun to play."

When host Howard Stern noted that there is a special kind of energy when musicians from different background play together, Lars said: "For me, and I use the word 'wheelhouse' a lot, playing those AC/DC songs is right in my wheelhouse. If they had said — I mean, I love RUSH — [but] If they had said, 'Come up and play '2112' with Alex [Lifeson] and Geddy [Lee], I'd go, 'I think there's somebody more qualified to do that than me.' But playing those AC/DC songs with the four FOO FIGHTERS guys and Brian was just a fucking next-level magical experience. And then in L.A., a couple of weeks later, we did a BLACK SABBATH medley with Geezer Butler, O.G. bass player and absolutely one of the geniuses of the early days of hard rock and metal, we did a couple of BLACK SABBATH songs. So it was great fun to go do that.

Pressed about whether he could play a RUSH song with Lee and Lifeson if asked, Ulrich said: "Could I do it? Obviously, playing with Alex and Geddy would be incredible. Some of the guys, Chad Smith played and Dave played a couple of songs [with Geddy and Alex]. It would be an uphill thing. It would take a lot of rehearsal, a lot of prep. '2112' would probably be too much of a bite of the apple for me. But in terms of just feeling comfortable, and kind of doing the thing that exists sort of where I am, that AC/DC stuff is right in my fucking pocket. And I love that so much."

After Stern said that Ulrich could probably play some of the LED ZEPPELIN material with Robert Plant and Jimmy Page if he wanted to, Lars said: "I could do some of that, yeah. I could do the DEEP PURPLE stuff, definitely do the SABBATH stuff. Obviously, I've studied all three of those for close to 50 years now, so that's definitely in the wheelhouse… The first band I ever saw was DEEP PURPLE. When I was nine years old, I went and bought a DEEP PURPLE album the next morning. And BLACK SABBATH came soon after. ZEPPELIN was there also, but primarily DEEP PURPLE and SABBATH. So when I say I've studied it, it's just been there for 45, 50 years for me."

In 2020, Ulrich said that he is no longer bothered by people's criticism of his drumming abilities. Speaking to METALLICA's So What! fan-club magazine, the Danish-born musician said: "I've got to tell you, 20 years later, 30 years later, it just doesn't register anymore. I am so comfortable with who I am, I'm so comfortable with who METALLICA is, I'm so comfortable with our place in all of it. I've got an incredible wife, three great kids, my dad and [his partner] Molly, incredible friends, and lots of cool acquaintances. It's all good. I've got nothing left to prove, so it just doesn't register anymore."

Back in 2016, Ulrich, who has gotten a lot of flak over the years from people who accused him of being a poor drummer, told the "Talk Is Jericho" podcast that he went through a period in the mid-1980s "that probably culminated in the '…[And] Justice [For All]' album where I felt sort of compelled to try to show ability."

"Listen, when you've got Dave Lombardo and Charlie Benante breathing down your back, it was, like, 'Okay, I've gotta…' I tried to step it up a little bit and tried to do my own thing and do all this crazy shit," he said. "I was trying really hard to push the drums kind of into the foreground. And then, after like a year or two of that, I was, like, 'Okay. Seriously? Just do your thing. Chill out. Support the riffs. Do what's best for the song.' So since around I guess the late '80s — so I guess it's been, like, 25 years now — the only thing that's really interested me is just doing the best thing for the song."

Asked in a 2008 interview with U.K.'s Rhythm magazine if he was troubled by the fact that he's gotten a lot of flak over the years from people who accused him of being a poor drummer, Lars said: "It used to, back in the day — and I spent a lot of time overcompensating for that on the early records. But then you wake up one day and you're like, whatever. It hasn't bothered me for [many] years. I'm no Joey Jordison, I'm no Mike Portnoy, and I have nothing but love and respect and admiration for all those guys. When I hear some of the young dudes, they blow my mind with what they can do with their feet and stuff — but it's not something that makes me go, 'I need to feel better about myself so I'm gonna learn how to do what they do with my feet.' I'm not a particularly accomplished drummer but I am very, very, very good at understanding the role of the drums next to James Hetfield's rhythm guitar. I guarantee you I'm the best guy in the world for that, and that's enough for me!"

Ulrich stated about his playing ability in a 2012 interview with DRUM! magazine: "I usually feel like I've regressed. [Laughs] I'm like, 'Why can't I do that anymore?'" He continued: "I can't say that I necessarily sit down to practice, like, 'I'm going to play and practice so I can get better.' What happens is that I just sit down and kind of play to just more stay in shape."