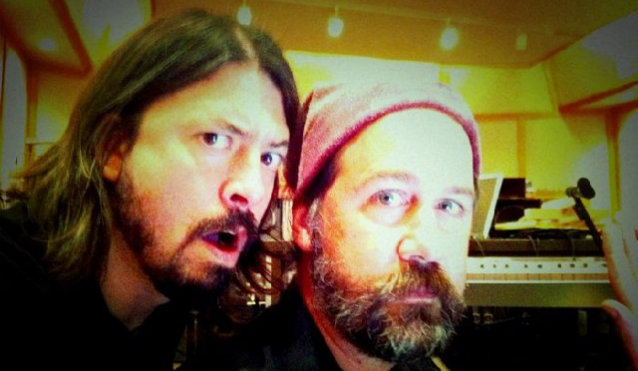 According to The Pulse Of Radio, Courtney Love said in a new interview with "Access Hollywood" that NIRVANA's induction into the Rock And Roll Hall Of Fame this coming April might get "awkward" due to her less-than-friendly relationship with the surviving members of the group. Love will be on hand to accept for her late husband, NIRVANA frontman Kurt Cobain, along with NIRVANA members Dave Grohl and Krist Novoselic.

Asked about her longstanding feud with Grohl, Love said, "We're going to go to the Rock And Roll Hall Of Fame and I think we're all sitting at the same table." The HOLE singer added that while it will be "awkward," she'll say hello to Grohl despite the public war of words the two have had for years over the use and control of NIRVANA's music.

Love also discussed her new YouTube channel/reality show, her battles with sobriety and her relationship with 21-year-old daughter Frances Bean in the interview.

NIRVANA were recently announced as 2014 inductees into the Rock And Roll Hall Of Fame, along with KISS, Peter Gabriel, HALL & OATES, Linda Ronstadt and Cat Stevens.

The induction ceremony will take place on April 10 in Brooklyn, New York. That same day will be declared Nirvana Day by the Washington town of Hoquaim, located just four miles from Kurt Cobain's hometown of Aberdeen.

Both of those events will take place five days after the 20th anniversary of Cobain's suicide on April 5, 2014.

Nearly two years ago, Courtney Love ranted about Dave Grohl on Twitter, calling him a "sociopath" who was "obsessed with his hatred" of Kurt Cobain. She also accused him of trying to seduce a then 19-year-old Frances Bean. Grohl responded through his publicist, saying, "Unfortunately, Courtney is on another hateful Twitter rant. These new accusations are upsetting, offensive and absolutely untrue."