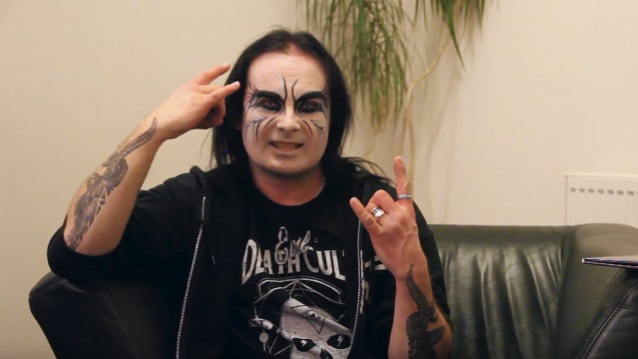 CRADLE OF FILTH Frontman On SLAYER's 'Farewell' Tour: 'I Don't Believe It For An Instant. Maybe It's Another Way For Them To Boost Their Sales'

Sam Sheppard of Mammoth Metal TV conducted an interview with frontman Dani "Filth" Davey of veteran British extreme metallers CRADLE OF FILTH prior to their January 28 concert at Columbia Theater in Berlin, Germany. You can watch the entire chat below. A few excerpts follow (transcribed by BLABBERMOUTH.NET).

On the recording process for the band's new studio album, "Cryptoriana - The Seductiveness Of Decay":

Dani: "We did it all at once. Well, the video ['Heartbreak And Séance'], was actually done once the bulk of the album…I think there was some mixing to be done, it was after that. We kind of decided to film the video in Latvia, with Lindsay [Schoolcraft, keyboards] coming over and recording her parts. Everyone came in one at a time to Grindstone Studios, which is in the middle of Suffolk, which is where I live. It's very remote, so not a lot to do other than concentrate on the album, which is the main thing. But we took ourselves to Brno in the Czech Republic for a couple of weeks; that's where Martin [Škaroupka, drums] and Ashok [guitar] live. We took ourselves there last summer and we were doing a festival in Slovakia at the end of those two weeks. We thought we'd use that time to put the album together because everybody had been working quite hard on their own ideas, either whole songs or parts of songs or collaborative efforts with someone else. We intended to come back with the session 50 percent or half of it in the bag, but we actually came away with about 80 or 85 percent of it written, so prolific was all the work people put into it. It caught me off kilter because I hadn't expected so much to be done so quickly. Suddenly, I was presented with pretty much a whole album and I had to throw an idea around it. Once that writing session happened, it was a catalyst for everything to start and it came around pretty quickly. Fortunately, it was a very good time of the year. It was autumn; it was very atmospheric. I think I had a couple of weeks off to tour with my other band DEVILMENT, but that was it. I was pretty much, after Christmas last year, in the studio until about June."

Dani: "I don't believe it for an instant. I fell for the Ozzy [Osbourne] 'touring for the last time' in '83 or whatever it was. [Editor's note: It was actually in 1992.] I think SCORPIONS have done it; ACCEPT have done it. We'll see. I mean, if the money's right, people come out of retirement. Maybe it's another way to boost their sales a bit, announcing the last tour. I hope it's not their last tour. It would be a bit sad if it is. I think the same applies to them as with people like [Glenn] Danzig. Just think, do I need to be doing [it]? Am I comfortable? They're probably comfortable enough to be close to retirement. They get paid well for gigs. I think they'll be alright."

On the status of "The Cruelty And The Beast" re-release:

Dani: "It's pretty much there. We've spent six weeks [working on it]. It sounds like a lot of time on a mix, but if you consider the odds that are stacked against us. The fact that we've had to take them from the original tapes and transfer them to digital because they are on tape, they're set to their own click-track, they're 20 years-old, so there's a lot of things that have changed. It's been a lot of work to get it to a place where it's going to sound brilliant, but hasn't robbed any of the atmosphere. I think people are really going to dig it. We've done the whole album, plus [their IRON MAIDEN cover] 'Hallowed Be Thy Name', because it was another track that we felt sat really well with the album and also suffered from a rather shoddy drum sound. I think people are really going to like it. We haven't actually finished it. The thing with Scott [Atkins, producer] is that he's a perfectionist as well. Even though he's got other jobs [going] on, he's sending me mixes. We're not going overboard on it. We just want to make the fans very proud of the fact [we beefed it up] and kept the [atmosphere] same because it's a tightrope really to walk, a thin knife-edge between making it sound great, modern and big and destroying all of the atmosphere. We want to retain that, obviously. It's been a lot of fun. It's been a real trip down memory lane. Yeah, I can't wait for people to hear it. I don't know when it's coming out, but it's coming out this year."

"Cryptoriana - The Seductiveness Of Decay" was released last September via Nuclear Blast.