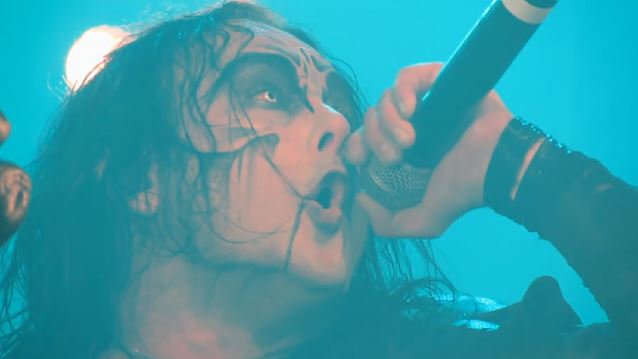 CRADLE OF FILTH To Enter Studio In November

British extreme metallers CRADLE OF FILTH will enter the studio on November 24 to begin recording their new album, tentatively titled "Hammer Of The Witches", for a June 2015 release.

During a recent interview with the "Bleedin' Loud" podcast, CRADLE OF FILTH vocalist Dani "Filth" Davey confirmed the band's split with guitarist Paul Allender and spoke about the group's plans for the new CD.

"Paul Allender has left [CRADLE OF FILTH] — which not everybody is aware of," Dani said. "We weren't planning on it, because it was the kind of thing that has been, kind of, brewing for the last year or so. Not so much on a personal level, but [him] living in America [in Minnesota] and then him doing his side project [WHITE EMPRESS] and getting kind of lost in that. I know I've got [my own side projects] DEVILMENT and, dare I say, TEMPLE OF THE BLACK MOON, but it never really came between CRADLE; I always found time to do it. For example, the DEVILMENT album, it'll come out, literally, the mirror's image of when the CRADLE [album] will come out — [the DEVILMENT album will come out] about autumn, and CRADLE's next album will come out spring next year. So the DEVILMENT and [CRADLE] won't meet anytime soon, so that's okay."

As of late June, CRADLE OF FILTH's new lineup had "about eight [new] tracks" in various states of completion for the follow-up to 2012's "The Manticore And Other Horrors", and "it's sounding awesome," according to Dani. He previously said some of the new material is comparable to that of 'Dusk... And Her Embrace' [1996], 'Cruelty And The Beast' [1998] and 'Midian' [2000], albeit with a fresher sound." He added: "I can't define it exactly, as it incorporates a wide variety of styles and dark emotions as one would come to expect from a CRADLE record. One thing is certain, though: this next release is going to be pushing the boundaries of what the band can achieve, and with forthcoming live shows peppering the writing process, I know this album is going to be fuelled by 101% metal fury!"