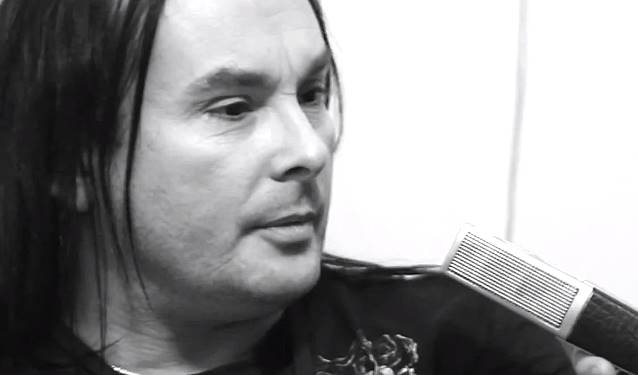 PitCam TV conducted an interview with vocalist Dani "Filth" Davey of British extreme metallers CRADLE OF FILTH during the band's European co-headlining tour with. You can now watch the chat below.

Guitarists Paul Allender and James McIlroy both sat out CRADLE OF FILTH's European tour with BEHEMOTH due to "hugely important family matters" and "serious neck surgery," respectively. Filling in for them were Ashok of Czech groups ROOT and INNER FEAR and Richard Shaw of English acts EMPEROR CHUNG and NG26.

2014 marks the 20th anniversary of "The Principle Of Evil Made Flesh", the historic debut album from CRADLE OF FILTH on Cacophonous Records. To honor this momentous occasion, CRADLE OF FILTH is planning a whole smorgasbord of exciting stuff, including the first-ever CRADLE OF FILTH comic, the release of a career-spanning double disc best-of, and, of course, the subsequent touring.