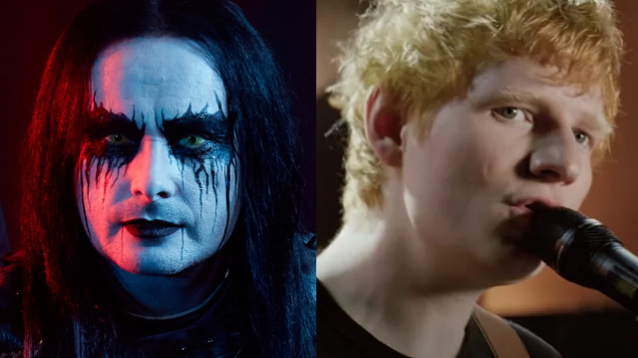 CRADLE OF FILTH's Song Collaboration With ED SHEERAN Is In The Works: 'He's Done Some Of It', Says DANI FILTH

Dani Filth says that CRADLE OF FILTH's collaboration with Ed Sheeran is in the works. Speaking to Knotfest, Dani said: "We still have yet to finish our song with Ed Sheeran. He's done some of it, but then he had a baby, and then he got obviously sidetracked with that and doing whatever Ed does, which is play massive shows around the globe. He's not at our beck and call. But he is gonna finish it, he assures me. Actually, I spoke to him quite recently."

As for when CRADLE OF FILTH's collaboration with Sheeran might see the light of day, Dani said: "[It will be released] when it's finished. We don't know when it's coming out."

Filth originally broke the news about potentially working with the 31-year-old singer/songwriter, who is one of the most successful musicians on the planet, during an interview with Kerrang! Radio"Breakfast Show" at last year's Bloodstock Open Air festival in the U.K. At the time, Dani said: "I've actually been e-mailing with [Ed]… He actually touched base with me. I've been invited up to his place. Well, he said he could come down to mine, but I pointed out to him that I don't own my own bar or village, and it'd be better if I went there.

"He said he'd do anything," he added. "Quite literally. He said he's a massive fan. He seems like a genuinely very nice guy actually."

Filth went on to say the prospect of collaborating with someone like Sheeran is not as far fetched as one might think. "We've always been like that," he explained. 'If someone tells us not to do something, then we'll do it. That's been our prerogative the whole time. I did this rap song with this band called TWIZTID in America. It's actually turned out more like RAMMSTEIN and BEASTIE BOYS than full-on rap. So, in that respect, I think it the Ed Sheeran collaboration would be great fun. I think it'd be great if we did it for charity, because at least it would bring a bit of credibility to it. Because obviously to his public, it'd be, like, Oh my god, he's got this weird comical guy,' and to my public it'd be, like, 'Oh my god, this is a bit weird, isn't it? But I think that sort of thing nowadays works."

In July 2021, Sheeran floated the possibility of exploring a more extreme musical path while speaking to The Sun. He said: "I was really into death metal as a kid. I listened to CRADLE OF FILTH and SLIPKNOT and all that stuff. I'm not saying I could ever step into that world. I learnt all those riffs on guitar as a kid. That's something I've never thought about doing — but something I would not be opposed to creating."

After The Sun published Sheeran's comments, Filth posted a screenshot of an article headlined "Ed Sheeran is open to recording a death metal album after spending his youth listening to CRADLE OF FILTH" and wrote in an accompanying caption, "I'll believe it when I see it. Fellow Suffolk lad could come good in the end. 'Dracula's Castle On The Hill' anyone?"