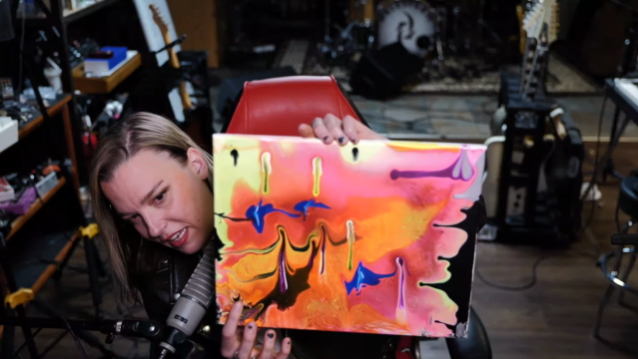 HALESTORM's LZZY HALE On Her Paintings: 'I Leave A Lot Of Things Up To Chance'

HALESTORM frontwoman Lzzy Hale was a guest on the latest video episode of the podcast "Side Jams With Bryan Reesman". During the chat, which can be seen below, Lzzy discussed her paintings and went through all seven of her major pieces. Several excerpts from the conversation follow.

On her painting being colorful:

Lzzy: "It's definitely a strange part of my psyche because if you look in my closet, there's a lot of black. I don't have a whole lot of color in my life. When I first started getting into doing art, I started with sketching and just a lot of abstract ways of doodling. I would stop and start because I hadn't quite found my medium and the place that feels like home to me, feels like you can actually do something. So when I got into acrylic painting, I ended up doing the layers of color. I'm not necessarily using a paint brush, I'm using some scraper tools in order to spread things around and make little indentations and a lot of texture. Then I will layer over that with acrylic pour over paint which is so much fun and so messy. I almost feel like I am this little kid again in first grade discovering different colors and how to combine things and what can be a little bit more radical. It's been this weird extension of this colorful side that I need to get out in some way. I just started doing it and got a bunch of drop cloths, and I've messed up a bunch of old Levis because now they've been dubbed my painting jeans."

On her creative process:

Lzzy: "I'm putting on music most times and just going with that. For this one actually, I put on some '80s hair metal stuff. I think this was WINGER. [Laughs] But there's just an eclectic mixture of different things that I enjoy listening to. There was some DIO stuff in there. It's a lot of flying by the seat of my pants.

"I leave a lot of things up to chance. I like to do that with free form doodling too where you throw yourself headfirst into the maze and then almost decide to reveal whatever it's going to be. Sometimes you feel, like, 'Did I take that too far? Maybe my last step before the final form is where it's at.' Then sometimes those happy accidents — there's little things that bleed through that you want to accentuate, and that's the point. That was the reason for me doing that."

On being inspired by other artists:

Lzzy: "I love going to any type of local pop-up little art displays. That happens a lot. Like over the summer we'll be in some random place in Michigan and you'll see it advertised that somebody will be renting out just a space or a house. There's all these local artists that get to display some of their works. It's fun to immerse yourself. You get to look at life in a little bit of a different way and see it through their eyes, through their art. There's a friend of mine out of Cleveland, Ohio. Her name is Eileen Dorsey, and she's an amazing painter. She works with acrylics as well, but she does a lot of nature. It's a lot of wooded areas, like if you're standing right in the middle of it. She does a lot of murals, and her art is amazing. She has been doing it for years and actually got the opportunity to do a couple different things for some artists. She's coming up in the scene. She's one of my favorites. I've been nerding out with her — 'Hey, I finally started doing it.' She's, like, 'Awesome! If you need any advice, I'm here.' It's like a call to arms."

On how painting and fishing help her recharge with music:

Lzzy: "[They're] another way to turn your brain off, and I think that's important. I could say the same thing about cooking. It's important for people like us who are banking on the arts to keep things moving. You can get burnt out if you have all of your eggs in one basket. You can be like, I've been plugging away at this for a long time. I need a sidestep, I need something to take me away from this so that I can come back to it with fresh eyes, fresh ears. I used to feel guilty about it. 'I just spent four hours painting when I could be practicing guitar.' Or, 'I could be doing something else that would be forward movement for the band.' And then I realized that you shouldn't be feeling guilty for doing those things. Because it's all connected, and they all help each other."

On whether she would put her art on a guitar:

Lzzy: "I have a couple of guitars that I probably would be brave enough to do that with. I could screw them up a little bit. I might have to strip it down a little bit, but that would be an interesting project. Just to do something like this and I'd have to end up putting a lacquer on top of it. That'd be fun."