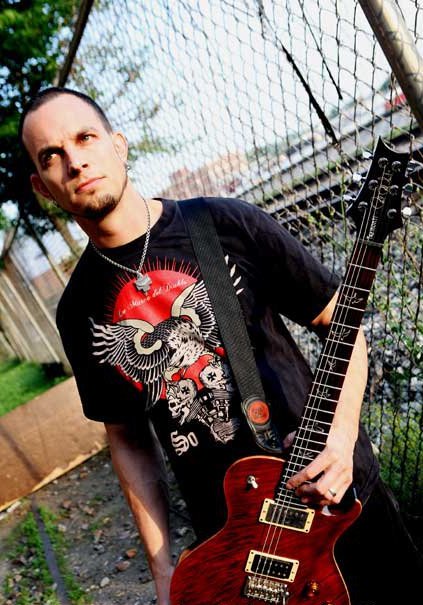 CREED and ALTER BRIDGE guitarist Mark Tremonti has set "All I Was" as the title of his debut solo album, tentatively due this spring.

Working songtitles set to appear on the CD:

Tremonti recently said that his upcoming solo album will be heavier than both CREED and ALTER BRIDGE — and contain even more lead guitar solos than he does with either group. Speaking with ARTISTdirect, Tremonti explained, "It's a dynamic record. It's probably heavier than either CREED or ALTER BRIDGE, but it's still melody-driven. Most of the stuff is more up-tempo and heavy-riffing though. I had to write eleven solos for this record so it took me a long time. There's lots of soloing."

Tremonti added that he has finished his parts for the album, and is now just doing some last minute fixes here and there. He hopes to mix the record in February and have it in stores in either March or April. The guitarist told The Pulse Of Radio not long ago about his tentative release plans for the project. "We're trying to do it different," he said. "We're trying to every month put out two songs with, you know, your ringtones, your T-shirts, with — I'm gonna do instructional DVDs and the other guys will do instructional stuff, tutorials on how to play the songs and whatnot. After six months we'll release the whole album, and if everybody downloads the songs along the way, they'll get a signed copy of the whole record. We'll do everything we can to make it appealing to people."

Tremonti probably won't get a chance to mount a solo tour as he and the rest of CREED are heading out on a spring trek in which the band will play its first two albums, 1997's "My Own Prison" and 1999's "Human Clay", in their entirety.

All the small-venue shows will also feature additional tunes from the quartet's four-album catalog.

CREED is also working on a new album for release in 2012, while ALTER BRIDGE is set to tour Australia in late February/early March.