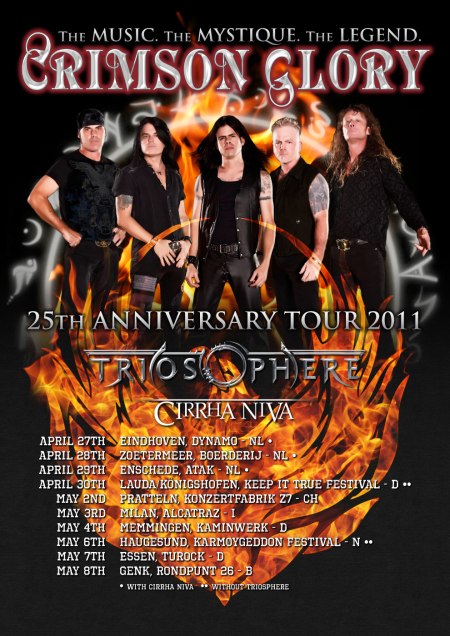 Their European tour schedule for spring 2011 is as follows:

Among the tour dates listed are a selection of notable festivals, including Keep It True in Germany and Karmøygeddon in Norway. CRIMSON GLORY will also be performing at the Dynamo in Eindhoven, where the band played its first-ever show in Europe 25 years ago.

"We are very excited about the opportunity to perform in front of our many loyal friends and supporters over in Europe, as well as for our new fans and friends, on the 25th anniversary of CRIMSON GLORY," said lead guitarist Jon Drenning.

"Playing in front of our diehard German metal heads at the Keep It True festival will be a real honor for us, as will playing at the Karmøygeddon festival in Norway. We have never performed in Norway before, or in Scandinavia for that matter, and we are honored and excited to finally meet our Norwegian following at such an event We're eager to play Italy again as well; the fans there have always been some of our most wonderful and enthusiastic."

"Playing for our long-time fans in Belgium and the Netherlands is something we're also very excited about," Drenning continued. "The Dynamo in Eindhoven, Holland, has a very special place in our hearts, as it was the first show and venue we ever played in Europe. I remember it well because we performed on the day our first album was released to the general public. So it will be great to perform again at the Dynamo (and maybe play a game or two of spikes!) The Dutch have always been so wonderful to us, and they helped us get off to a great start."

When asked about whether the band had plans to perform wearing their iconic silver masks, Drenning hinted at the possibility of their return. "We have discussed the idea of wearing the masks for a select group of shows at times during our anniversary year, as we've been approached by some promoters who would seriously desire to see it; I'm sure the fans would too," he said. "All I can say is that if the stars align, we would be open to doing it."

Drenning also shared his excitement for the unveiling of their new front man.

"We can't wait for our fans to see and hear Todd La Torre live, as he's every bit as impressive onstage as he is in the studio," he said. "He brings a tremendous amount of passion and emotion to our songs, as [late CRIMSON GLORY singer] Midnight did, and originally intended them to be."

La Torre is probably more anxious than anyone else to hit the stage and meet the fans, and had this to say about performing with CRIMSON GLORY this spring: "I am very excited to be sharing the stage with my fellow bandmates, as well as performing many of the classic songs from the first two albums. I am honored and truly touched by the overwhelming embrace of the fans since officially joining the band on July, 10th, 2010. As the newest addition to the original lineup, I am especially pleased to be celebrating the 25th anniversary of the band along with all our supporters: the worldwide Crimson Militia; without you, there would be no us. See you next year!"