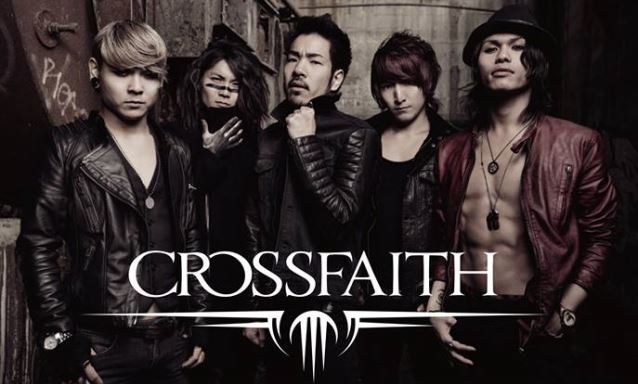 "Apocalyze", the new album from the Japanese quintet CROSSFAITH — featuring Kenta Koie (vocals),Terufumi Tamano (programming),Kazuki Takemura (guitar),Hiroki Ikegawa (bass) and Tatsuya Amano (drums) — sold around 1,500 copies in the United States in its first week of release. The CD, which was released in the United States and Canada through The End Records on September 3, was produced by Machine (LAMB OF GOD, EVERY TIME I DIE, FOUR YEAR STRONG),who also helmed the group’s "Zion" EP.

Koie had this to say about the recording process and CROSSFAITH's ongoing relationship with Machine. "Once again, it was great to work with the legendary Machine! He understood us so well after working together last year on the 'Zion' EP, and he made sure that we made the best CROSSFAITH record possible. He definitely shared our vision for the future!"

In addition to performing at the prestigious Loud Park and Summer Sonic festivals in its native country, CROSSFAITH has played for audiences all over the globe, including at Australia’s Soundwave festival, Belgium’s Groezrock, Vans Warped Tour at London’s Alexandra Palace as well as supporting a diverse set of acts such as MACHINE HEAD, HATEBREED, AUGUST BURNS RED, PIERCE THE VEIL, PARKWAY DRIVE, BLESSTHEFALL, ALESANA and BRING ME THE HORIZON.

CROSSFAITH combines metal, hardcore, samples and electronica to create groundbreaking music that transcends genres. Their 2009 debut album, "The Artificial Theory For The Dramatic Beauty" (Zestone Records),served as the catalyst in Japan; distinguishing the group as a true force and propelling them to the top of their game.