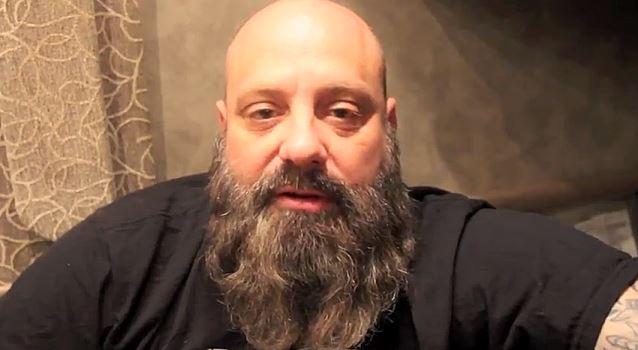 CROWBAR frontman Kirk Windstein believes that bands like KISS should quit making new albums because their latest material doesn't come close to matching the quality of their classic output.

Windstein, who credits KISS with inspiring him to play music when he first heard the Paul Stanley- and Gene Simmons-led outfit back in 1975, tells Echo Asylum 's Insanity: "You hate to say it, but some bands, as they get older, they put out a record as an excuse to go on tour."

He continues: "As big a fan as I am of KISS, and, actually, after reading Paul Stanley's book, I have a whole new insight on why they have Tommy Thayer and Eric Singer in KISS, and I do agree with Gene and Paul that at this point they probably do belong in KISS, even though Ace [Frehley] is my favorite character and member. But with a band like KISS, honestly, I wish that they would quit making records, because I haven't liked the last couple of records that they've done. I understand they wanna make new music, but Jesus, the guys are getting close to their mid-60s now, and it's, like, let's be honest… For the most part, the people [buy KISS concert tickets] to see… they wanna hear 'Detroit Rock City', 'Rock And Roll All Nite', 'She', 'God Of Thunder', 'Shout It Out Loud'… I mean, they're not buying the tickets to hear the songs off the new record, and it's kind of like an excuse, like I was saying to just… It's just my opinion, [and] it doesn't mean shit, but, to me, I think they should just continue to do the classic KISS stuff."

Windstein adds: "The thing is there are a lot of bands that have been around a long time that are putting out amazing records, like EXODUS and TESTAMENT, a lot of bands that were very popular and kind of died down and are popular [again]… You know why? Because, I mean, it is nostalgia, to a degree, but they're also putting out records that are fucking amazing. So we wanna be one of those bands. We don't wanna live off anything we've done in the past, we want to continue to build our audience with CROWBAR and look forward. We don't have rearview mirrors on our fucking mirror. [We] just look forward and roll."