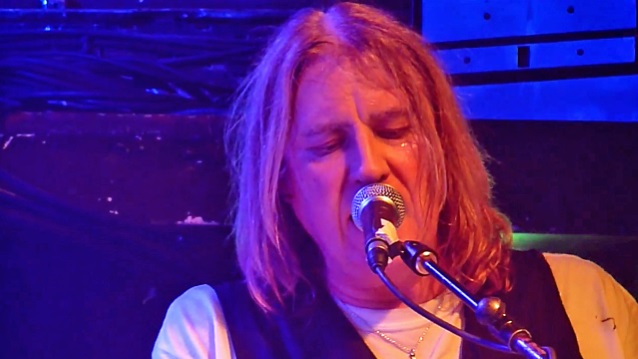 On December 14, DEF LEPPARD and DOWN 'N' OUTZ lead singer Joe Elliott was interviewed by Mick Burgess of Metal Express Radio before DOWN 'N' OUTZ's concert in Newcastle, England. You can now listen to the chat using the SoundCloud widget below.

Asked about the progress of the songwriting sessions for DEF LEPPARD's next studio album, Elliott said: "We've got lyrics to write for about four or five [songs], which I should be [getting back to work on], as soon as I get [done with this DOWN 'N' OUTZ tour], I will be straight back in that mode. We've got about fifteen songs going. Seven or eight of 'em are [completely] written. The other seven are musically written that need melodies. I will get straight back [to work on that] in January."

Regarding the musical direction of the new DEF LEPPARD material, Elliott said: "I don't know. It's a good question. It sounds like LEPPARD. It sounds like what LEPPARD should be doing at our age as well. It's a bit more… I don't wanna say 'mature'; that's the worst word you could ever say. But it's certainly not a childish record. I mean, there's a couple of songs on there that absolutely are typical LEPPARD anthemic things. But there's a lot of cool stuff which is a lot more musical, if you like, and a lot more experimental, if you want, without being jazz or anything like that."

Guitarist Vivian Campbell, who once again has successfully battled back against Hodgkin's Lymphoma, told a Canadian radio station that because the band tends to record in stages, one is never really sure what the end result will be. "The way DEF LEPPARD records work, the last guy in the studio gets to have the final word," he said. "So who knows? I'm not gonna be there because I have too much medical stuff going on. I'm kind of done at this stage. There may be a final session in January or February that I'll not be party to, so I have no idea what the final thing's gonna be."

He went on to joke: "All I can tell you is my involvement was with the first part of the record, and it was a hard rock record at that stage, so if it comes out being wussy, I'm not accepting blame. I'm throwing my hands in the air."