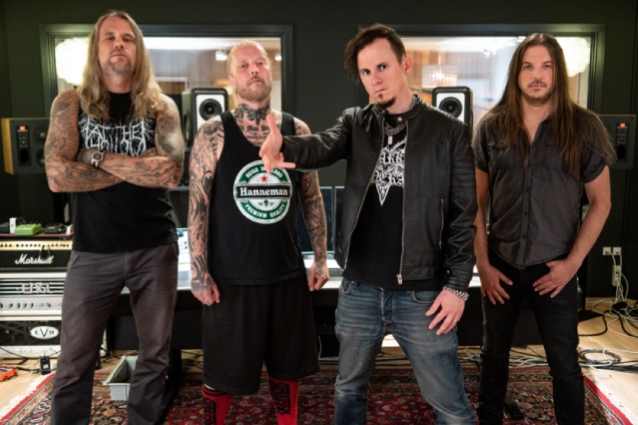 At last month's NAMM show in Anaheim, California, CYHRA vocalist Jake E (ex-AMARANTHE) spoke to Heavy New York about the progress of the recording sessions for the band's sophomore album. "It's almost done," he said. "We have recorded it. We have mixed it once. We're remixing it right now, actually, because we wanted to tweak it a little bit more. We're a little bit delayed, but we're really, really happy with it."

Saying that CYHRA's new songs are "amazing," Jake described the band's new disc as "more of a follow-up" to 2017's "Letters To Myself". "It continues where the last album [left] off," he said. "So we haven't invented any new fantastic patterns or whatever when it comes to music. The music is what it is. It's CYHRA — you can hear that it's CYHRA directly."

Asked if he and guitarist Jesper Strömblad (ex-IN FLAMES) took elements from their previous bands while composing the first material for CYHRA, Jake said: "That was a funny thing. We never really thought about what we wanted to do. We more or less just took the guitars and started to play. And obviously, Jesper, he's Jesper Strömblad — he has those melodies in his fucking hands. Give him a guitar and there's a hit coming out of his fingers. And I have my way of writing music. So I guess there were some similarities from our former bands, but, to be honest, what is similar is just our way of writing music, I guess. But we were never really discussing what we wanted to do — we just sat down and we did it."

Back in December, drummer Alex Landenburg told Finland's Tuonela magazine that CYHRA's next disc would stay true to the group's sound. "It's clearly the same band," he said. "It changed and evolved, but I think it's mostly Euge [Valovirta, guitar] having a bigger part in the writing and the playing of the album and having the mindset of having two guitars on the album. So, naturally, it's more riff-oriented, more guitar-oriented than the first one. That is probably the biggest difference."

Jake added that CYHRA's second album would contain "a little bit more live-oriented songs. We figured out that not a lot of the songs, but some of the songs on the first album didn't end up being that 'party' — if we can call them a little bit party poopers live, because they're great to listen to in general, but when you have a live set, it's hard. Usually when you release one album, you just get a couple of shows, and then you release a couple of more albums and your career takes off. We were fortunate enough to have our career take off pretty fast, and then we have to play the whole album, all the songs, because we don't have any other songs. But now with the new album, there's some songs that are faster and harder."

CYHRA's new LP is due in later in the year via Spinefarm Records.

The band made its live debut in October 2017 at Nosturi in Helsinki, Finland.