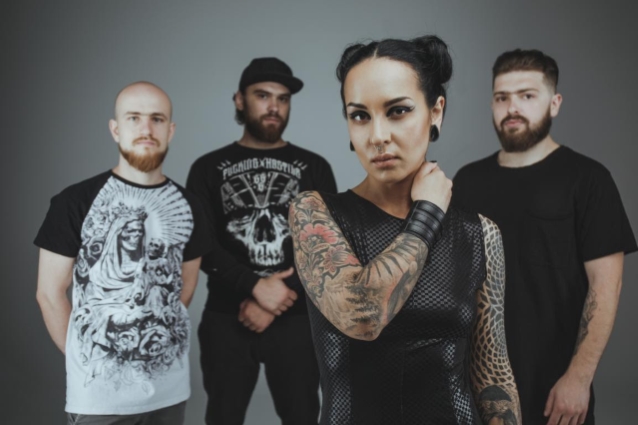 JINJER Hopes To Release New Album In The Fall

JINJER bassist Eugene Abdiukhanov has told Metalshop TV that the plan is for the Ukrainian metal act to release its next full-length album in the fall. Asked what fans can expect from JINJER's upcoming disc, Eugene said (see video below): "You see what the problem is. Talking about JINJER, everybody needs to understand that we don't know. We never know what it's gonna be until we are done with the last song.

"People are very surprised to know that, after we are ready with an album, there is nothing left behind it," he continued. "A lot of bands just make 25 songs; then they choose 10 and 15 are left outside. No — it never happened to us. We just make good songs. No fillers — nothing like that. We make it until we know, 'Oh, that's okay. We are done.' If it feels like eight songs, it will be eight songs. If it feels like 10 songs, it will be 10 songs. So there is no plan, there is no intentions — we just start writing, and it turns out the way it should be."

The band recently provided direct support to DEVILDRIVER on the latter act's U.S. tour, which kicked off on October 23 in Phoenix, Arizona. The tour wrapped on November 18 in San Diego, California.

"King Of Everything" was released in July 2016 via Napalm Records.