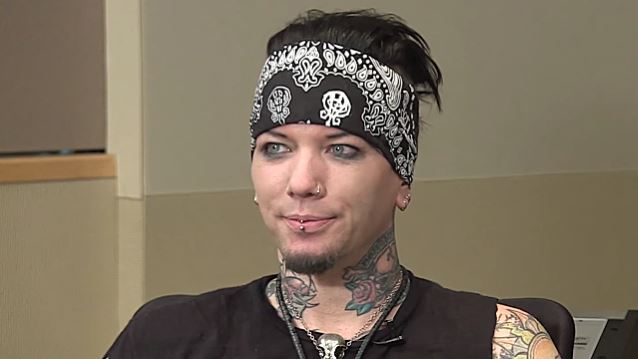 GUNS N' ROSES guitarist D.J. Ashba has announced his departure from the Axl Rose-fronted outfit. He says in a statement: "Six years ago, I received a call that changed my life forever. The call was from a dear friend of mine (Katie McNeil-Diamond) who was working with GUNS N' ROSES. It was an offer to audition for Axl Rose and earn a role in arguably the biggest rock band of my time. While I thought it was a complete long shot, I decided to go ahead and give it a try. Much to my shock and surprise, I got the gig. And so began the most incredible journey I could have possibly imagined. I was blessed with the opportunity to not only work with one of the most talented bands, but also to share the stage with a living legend and a truly gifted human being, Axl Rose. The amount of confidence and trust that Axl placed in me was genuinely heartwarming and truly career-defining. In the years that followed, I traveled the world many times over and played these incredible songs night after night to the most enthusiastic and loving crowds. As you can imagine, the friendships that were forged during that time were deep and long lasting. But the most beautiful surprise of all was YOU... the fans. You welcomed me into your lives with open arms and showed me love and support that I could only have dreamed of. From the very first time I stepped on stage and started playing 'Welcome To The Jungle' and felt the crowd erupt, I knew my life would never be the same. I'm not gonna lie...I was terrified!! But you were so accepting. You immediately turned my fear into pride. For that, I am truly grateful.

"So now it is with a very heavy heart and yet great pride that I announce that I've decided to close this chapter of my life and encapsulate the wonderful times that I've shared with GUNS N' ROSES into fond memories. I have reached a point in my life where I feel its time to dedicate myself to my band SIXX: A.M., my adoring wife and family, and to the many new adventures that the future holds for me.

"I have always been driven by my passion for creating music and SIXX: A.M. has always been a place where I can express myself honestly and share that passion with my two brothers and bandmates, Nikki Sixx and James Michael. As you know I have also been blessed with the love and support of my incredible wife, Naty, who has been at my side for much of this amazing journey.

"As I sit here writing this letter, I want to take a moment to thank Axl from the bottom of my heart for not only the most incredible experience of my life, but for truly believing in me. You are a true friend and a champion of mine and I am forever grateful. And even as I move on to pursue other endeavors, I will always remain one of your biggest fans. I also would like to thank each and every one of you fans for your love and support throughout the years. Without you, I am nothing. Please know that I do not take one minute of this amazing life for granted.

"I hope that you all join me as I forge ahead. Let's conquer the world together!"

Speaking to UnskinnyPop.com in May 2014, Ashba talked about what he feels is "the most misunderstood thing" about him. He said: "I don't really read a whole lot about myself other than what is on my social media stuff. People seem to know more about me than I know about me. I think people confuse me joining GUNS N' ROSES… I mean, I saw a few comments that said, 'Hey, he's trying to be Slash.' Well, that's not true in any way. I think he is his own person and I have a lot of respect for what he's done for the band as far as his guitar work and stuff. I grew up loving the band and that whole thing is kind of weird to me. I am obviously my own person and would do what anyone would do in my position and just keep the music alive, do whatever you can do to stay as true to that music as you possibly can, and I think that is the respectful thing to do. In my mind, that is where I'm coming from."

Ashba said in a 2014 talk with Legendary Rock Interviews that the band had both recording and touring plans in 2015. He revealed, "We are planning on doing quite a bit of touring this coming year. The focus is getting in a studio and putting together what we all feel is the best GUNS N' ROSES record. Lack of material is not an issue. We have tons of stuff."

Ashba added: "Axl has two full albums that he has recorded. He has played me a bunch of songs off of that that are incredible! I can't wait to get in and kind of dive into those as well. I've written tons of songs and demoed up a bunch of stuff. I think it is just a matter of getting in and sifting through the piles of material."

Another GUNS N' ROSES guitarist, Ron "Bumblefoot" Thal, recently revealed that he was focusing on his solo career after spending eight years playing in Axl's band. Thal, however, stopped short of saying that he was no longer a member of GUNS N' ROSES, which has caused some fans to criticize him for not coming clean about where he stands with the group. 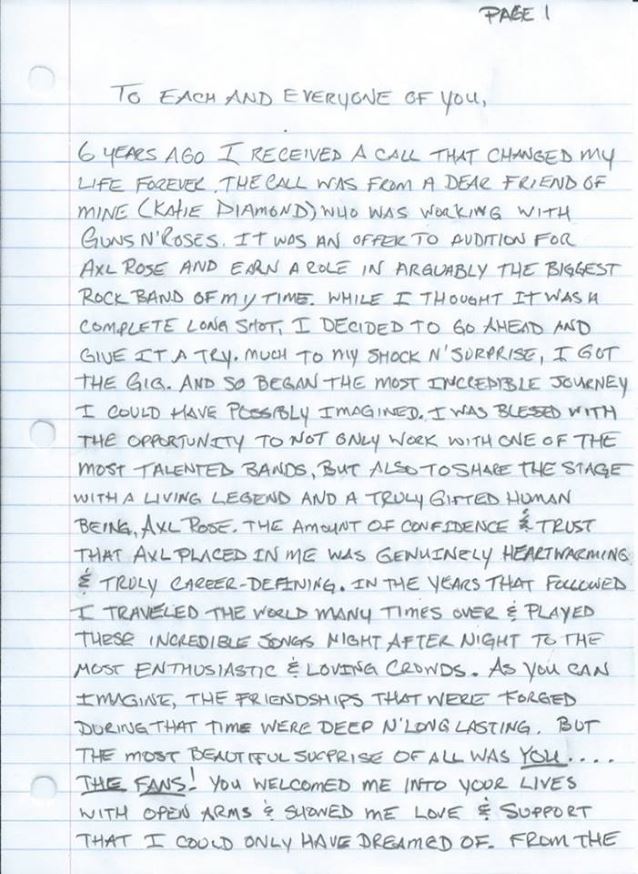 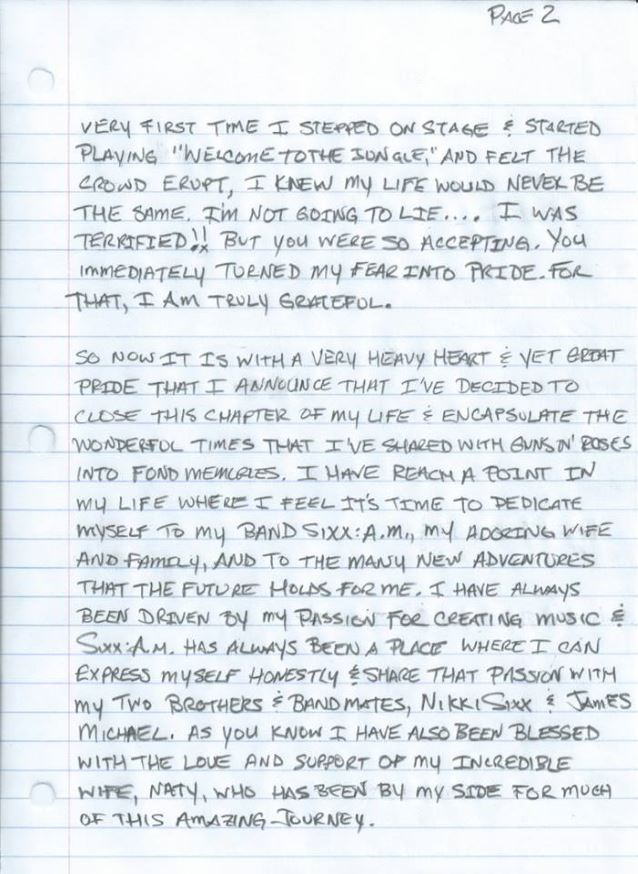 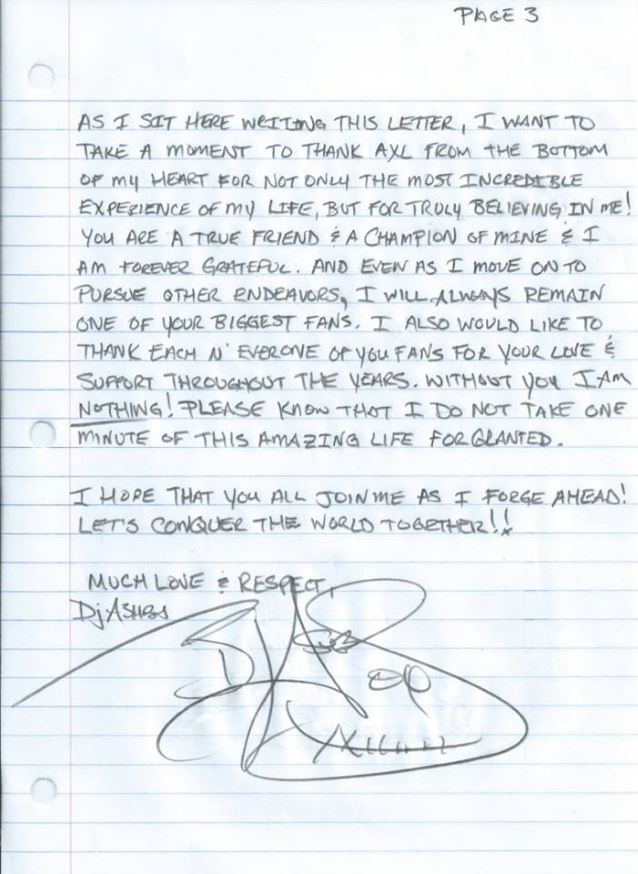