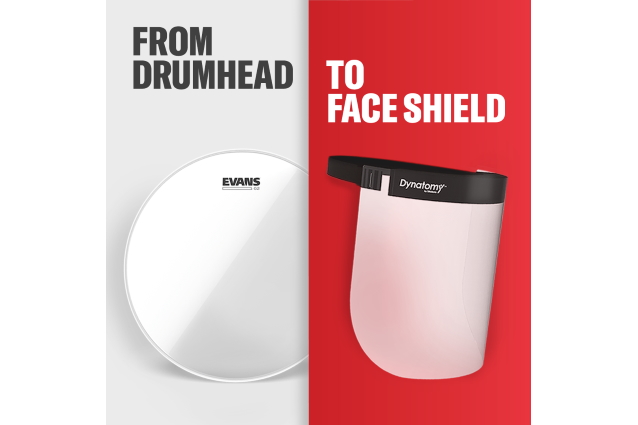 Even before D'Addario, the world's leading musical accessories company, was forced to close its D'Addario string and Evans drumhead factories in New York, they immediately began devising a way to use its engineering and manufacturing expertise to help alleviate the dire shortage of protective gear for New York and the nation's healthcare workers.

Led by chief innovation officer Jim D'Addario, the engineering team figured out they could fabricate protective face shields using the clear film from its popular Evans G2 drumheads. Working around the clock, three days later, the team had their first prototype. And since the company already produces physical therapy products through its FDA-approved Dynatomy brand, they were able to work quickly on manufacturing and distribution solutions. The plan is to mass-produce the Dynatomy Face Shield in the Evans Farmingdale, New York USA drumhead facility, utilizing American-made materials.

Commented D'Addario CEO John D'Addario III: "We called this Project Excelsior after the New York State motto, which means 'Ever Upward' because it captured the extraordinary determination and can-do spirit of our small team of engineers and product designers. It also typifies our music company's current credo during the COVID-19 crisis: #wewillplayon."

The goal is to be in production by April 27 or earlier and to ramp up as quickly as possible to a capacity of 100,000 face shields per week.

In many ways, the Dynatomy Face Shield is transforming D'Addario from a music accessories company into a medical necessities company.

"It's our intention to manufacture these shields as long as they're needed in New York or anywhere around the globe," said Jim D'Addario. "We've watched the incredible efforts of our healthcare and essential services workers all across the world with great admiration. While we cannot match the immeasurable efforts of these selfless heroes, we feel an immense responsibility to do our part in overcoming the COVID-19 crisis."

The D'Addario Foundation believes in the power of music to unlock creativity, boost selfconfidence, and enhance academics. D'Addario also reinforces its role as a social and environmental leader with initiatives such as Playback and PlayPlantPreserve.