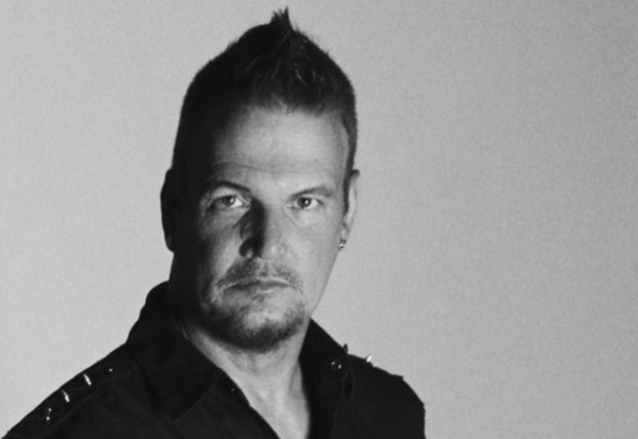 DISTURBED guitarist Dan Donegan recently spoke to Australia's May The Rock Be With You about the band's upcoming eighth studio album, which was recently mixed for a tentative fall 2022 release. Asked if fans should expect more single drops before the LP release, he said (as transcribed by BLABBERMOUTH.NET): "I think the gameplan… I hate that I can't talk too much about it and give it away, because we're excited and we would love to [share more information about it]. If you were interviewing David [Draiman, DISTURBED singer] right now, he's much better at spilling the beans 'cause he can't contain his excitement too much. He gives out the track listing and posts it. [I'm like] 'Dude, take it down. It's too early. Not just yet.' I appreciate his enthusiasm, but we've gotta save some surprises and that.

"I think there may be another single that will come before the album drops," Dan revealed. "Right now I don't have the official date that I can announce. I know that we were talking about a fall release, that it'll be right around the corner. Right here in the States, here in America, [the latest DISTURBED single] 'Hey You' is shooting up the charts rapidly. I think it's at No. 3, and it's only been out for, like, two weeks; it's No. 3 on the charts at rock radio. And it's off to a great start. I think the reaction and the responses that I'm hearing about or reading about right now is the excitement of a little bit of the old-school DISTURBED sound and the heavier riff with more of an animalistic David. It's still very melodic, as he is, but you're gonna get some of those growls coming back out of him too. So I think we're kind of tapping back into a little bit of the roots of the band."

Asked if DISTURBED's upcoming album will include any covers, Dan said: "I can't tell you… No, we're not gonna put a cover on here, but there is… I think fans will be surprised what they do hear on the album. I can't give away too much about it, but there is a big surprise on the album, but it's not a cover. But the majority of the material… I hate saying too much, because I want fans to hear it and form their own opinion. But they'll see. I think the majority of the album, there is a lot of the heavier sound. Obviously, with the last album, with 'Evolution', was the split between the acoustic stuff and the harder stuff. So this is… I'd say a majority of it is a lot heavier on this album."

Last month, Donegan told Janna of the WGRD radio station that the writing process for DISTURBED's new album began "last fall, in 2021. We got together a couple of times in the studio in person, down in Nashville and down in Fort Myers, Florida just on a couple of days off in between shows," he said. "And then we were just hungry to get back in the studio and attack it in February of earlier this year. We went down to Nashville [and] worked with a great producer, Drew Fulk, who is based out of California. But I asked him if he would mind coming to Nashville, just [for] a change of environment, go down there. And for me, coming from Chicago, it's a nice, easy flight to come in and out when I needed to. And we recorded February and March. [We were] in there for just under two months of tracking some great ideas."

Donegan went on to describe the recording process as a "a great collaboration. And I just think the hunger within the band of having that time off between the previous album, 'Evolution', and that break we had during the pandemic, we were just excited to get back in the studio and have some new material," he said.

Asked if he would agree with Draiman's recent comment that the band's new LP is "about 90 percent heavy as fuck," Dan said: "[There is] some heavier stuff, definitely — some bigger riffs and heaviness to the album. There's definitely some of those moments to where there's some good old-school DISTURBED in there, some of the earlier days in the heavier-ness to some of the riffs and a little bit more of the aggression with David vocally. But there's also those big melodic moments as well.

"We do have a semi-ballad on the album too that I can't give away too much on that other than it was a great in-the-moment kind of in-the-studio [idea]," he revealed. "I switched gears. We had a song that we were working on that I just didn't feel like it was good enough at the moment, so I switched gears and started fresh with a new idea. And it was probably a great idea to do that because we got a really great one out of it. But I think the fans will be pretty pleasantly surprised with some of the direction on this and very happy with where we're going with it."

Donegan previously told WMMR's Brent Porche about the writing process for the new DISTURBED album: "I've always had a lot of ideas archived and just kept in the vault. But then I think when we ran out and did those handful of shows back in November, we went down to Fort Myers on a couple of days off to work with a friend of ours, another producer, Dave Fortman, who did EVANESCENCE, GODSMACK, SLIPKNOT; he used to play in UGLY KID JOE back in the day. So we went out and we did a couple of days with him, just to kind of improvise and track some ideas, just on a couple of days off, and that got the ball rolling. So we just went with all-new, fresh material — nothing from the vault. I just started pulling out new ideas. And it just progressed from there."

In July, DISTURBED released the aforementioned "Hey You", which is the first single off the upcoming album. The official music video for the song was directed by Josiahx. Draiman called the track "a wake-up call. We've become our own worst enemies," he said. "Civil discourse has become the exception instead of the norm. People have lost themselves in outrage addiction."