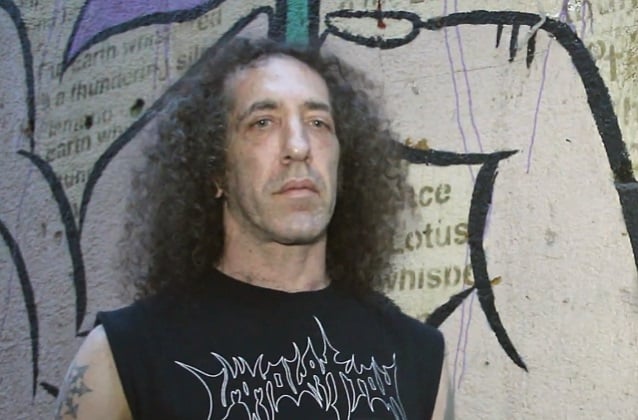 The Jimmy Cabbs 5150 Interview Series conducted an interview with NUCLEAR ASSAULT bassist Dan Lilker (also of BRUTAL TRUTH, ANTHRAX, STORMTROOPERS OF DEATH) at the X Fest, which was held on January 6 in Los Angeles, California. You can watch the entire chat below. A few excerpts follow (transcribed by BLABBERMOUTH.NET).

On the "farewell tour" of NUCLEAR ASSAULT:

Dan: "The concept is we're not going to come back to somewhere that we have played recently, but we haven't played L.A. for fucking years. But yeah, this would be the last one here. If something came up, like fucking Singapore or Bulgaria and we haven't played there, we'll do it, but we're not going to come back to where we've played in the recent past."

On whether he enjoys playing songs live from NUCLEAR ASSAULT's early discography:

Dan: "Yeah, sure, because there's people who are totally into that shit. The funny thing, you can see some of these kids, they're 17, 18 years old, they were like new millennials, but they're totally into it. They do their research and I'm not one of these old, bitter dudes like, 'These fuckers weren't alive when I made this record.' I'm just glad thrash metal in general is still relevant. It's an honor."

On whether he imagined he'd still be playing thrash upon starting out 35 years ago:

Dan: "I had no idea that this time of my life being in my early 50s already that I would still be able to get away with doing this. We could tell that the music we were writing then, we were forging a new genre and it has longevity. That's something that means a lot to me, but yeah, it's fucking awesome that I'm still doing this and like you said, kids who wouldn't even have been born then are still totally into it. No, I had no idea, but I'm psyched, I'm happy. I've played more modern shit since then like grindcore and black metal, but thrash, that's the shit I kind of started on as far as going around, going to Europe, doing records and all that. It's awesome that I can still do this. We got a sold-out show tonight with a bunch of killer bands. It's fucking awesome."

On whether the Internet has lessened the anger of the younger generation even in light of the world's current political state:

Dan: "The Internet has made people more passive and they could just click a button that says 'Like' instead of going out and doing something about it. I was never politically active. The bands I was in made statements, but I wasn't sitting there fucking protesting, holding up signs or anything. It's true now that, yeah, people are just kind of lamer because they can just click a button and express their emotions like that from the safety of their bedroom. You would say 'You can't get arrested doing that.' But, then if you want to be all conspiracy theory, maybe you can."

On whether he still feels the same amount of excitement playing today as he did during his early days:

Dan: "Yeah, sure, because it's almost like a trigger when you play that stuff and there's a whole bunch of people going nuts, that makes it timeless. It doesn't matter if it's now or 1987, it's the same feeling. It's a little micro-environment you're in, a little magical place for an hour. Yeah, when I go onstage — I'm usually pretty stoned, too — I go into a dreamland because it's all muscle memory with the riffs, I know what I'm playing, so I enjoy the show and look at people.

On how he maintains the physicality to play thrash and extreme metal at an older age and the status of his 2014 retirement from full-scale touring:

Dan: "Well, I have more aches and pains than I used to, that is true. I don't tour all the time like I used to. It was like a semi-retirement, which was a polite way to stop doing BRUTAL TRUTH at the time, but I was getting sick of traveling. Getting here from New York, it didn't matter it was one degree out when we left home, it was more about the first flight was late because they had too much fuel on the plane, like dumb shit, then you get stressed out. We barely made our flight here from D.C., my wife wasn't on the flight yet, she had to wait for some fucking gate check. I'm not going to bore you guys with the gory details. I just get too stressed out these days. The airline industry has become very stressful."

On whether playing sold-out shows inspires him to write new music with NUCLEAR ASSAULT:

Dan: "If I had to be completely honest, we would not be doing that. We're going to be that band that's just going to play the old fucking… I don't want to be the dude who says, 'Come see us. It's our last show,' and then show up next year. As far as writing new music, we did that 'Pounder' EP a couple years ago. I wrote three out of the four songs and went into a little time machine and tried to pretend it was 1985, which I think I pulled off. But I think people who come to see NUCLEAR ASSAULT want to hear the shit off 'Game Over', 'Handle With Care' and 'Survive'. We do play one new song live, but, I don't know, I think the old classics, they're still old classics. Not tooting my old horn here, but they are timeless songs. It's good enough to play those. We have a certain amount of time to play stuff, we have a lot of songs to fit in there and we choose the ones we think people want to hear, so it's mostly old shit so we're not going to bother with new shit."

NUCLEAR ASSAULT's "Pounder" EP was released on CD and as a digital download in 2015 via drummer Glenn Evans's own Sidipus Records.

Originally formed back in 1984, NUCLEAR ASSAULT bassist Lilker witnessed the birth of thrash metal first as an original member of ANTHRAX, as well as a crucial component to S.O.D. and BRUTAL TRUTH.

While many thrash metal bands tempered their aggression with melody, NUCLEAR ASSAULT stuck to its guns throughout and in the process, released such thrash classics as 1988's "Survive" and 1989's "Handle with Care". 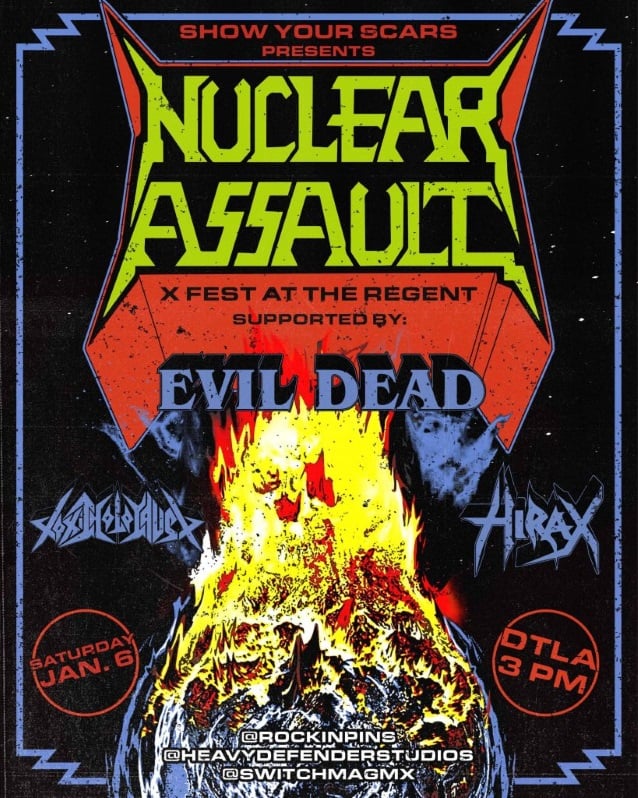