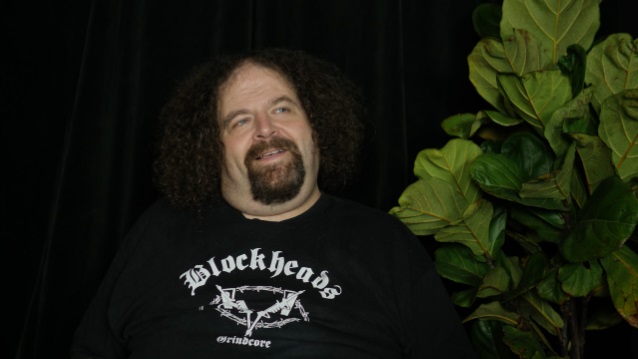 Christina Rowatt of Australia's The Void recently conducted an interview with bassist Shane Embury of British grindcore pioneers NAPALM DEATH. You can watch the entire chat below. A few excerpts follow (transcribed by BLABBERMOUTH.NET).

On the status of the next NAPALM DEATH studio album, which is tentatively due in 2018:

Shane: "We started recording some new stuff, four or five weeks ago. We got quite a lot of songs. Hopefully, we will be carrying on in the new year. It will take a while to get finished. It's fast, but there's also a lot of some, I don't want to say 'experimental,' but hopefully once it's done it will go in a few different directions. I don't want to say noise, but there will be some stuff like that, a couple of mid-paced, kind of KILLING JOKE-influenced [songs]. Hopefully we'll veer off in a few directions and it will make the album… it will still be abrasive, but not constantly fast all the time. There is some extremely fast stuff, but we've all been kind of like ticking away at every album, trying a little bit of that and little bit of that, so each step, this one will be the most diverse yet, I hope."

On maintaining an element of diversity in NAPALM DEATH's songwriting:

Shane: "On the last album [2015's 'Apex Predator - Easy Meat'] we started with a really strange, slow, SWANS-influenced track. Not everyone liked it, but I think actually, most people did like it, but the record label was, like, 'Oh, you can't start an album with four minutes of this.' [I said] 'If you don't like it, just press skip.' [Nowadays], most of the bloody kids like Spotify, so why bother being pressured. They'll just change the track if they didn't like it anyway. I'm not going to say, 'Just because our A&R guy doesn't like it, I'm not going to start an album with this track.' That's kind of the wrong reason, isn't it?"

On whether an attitude of defiance is an essential element of NAPALM DEATH and grindcore as a whole:

Shane: "I think so. It's also a part of your personality, probably a little bit as well. When I was tape-trading before I joined NAPALM and I was forming bands that we did and whatever, I liked the fact that I was into stuff that people didn't immediately get, you know? All my metal buddies. I come from a heavy metal/rock background, but as I went further and further than what my friends did, so I'd get a kick out of the fact that they didn't understand it. That was funny to me. I thought, 'Why don't you understand it?'"

On who he thinks are the originators of grindcore:

Shane: "NAPALM DEATH was a band that when they first started, they weren't very grindcore at all in '81, '82, '83 period, they were more anarcho-punk. They were early NAPALM DEATH. It was only '86 when it started to get really fast and that was due to bands like SIEGE and the Boston hardcore scene. They were also mixing it up with stuff like CELTIC FROST from Switzerland.

On whether he and vocalist Mark "Barney" Greenway can detect what each other are thinking while composing songs:

Shane: "I wouldn't say that. We're quite different. Me and Barn, we're chalk and cheese. He's very outspoken, political. I tend to not comment on any of it. I think with NAPALM DEATH, especially when you're coming into a band, the fact there's not an original member in the band anymore, that's a big point. I've been there since almost [NAPALM's 1987 debut album] 'Scum' came out. I should have played on it, didn't, big regret. But I was offered, but didn't, so that's the only big regret for me because that would have silenced all those people who say, 'You're not really an original member, are you?' But the band sets itself up as a very political kind of band, but I come from a metal background, but yeah, I have particular morals and thoughts about the world, but I'm all about the music. I'm all about making extreme music and making sounds. I got into SLADE, SWEET, JUDAS PRIEST, SABBATH, then I got into grindcore, then I started listening to SONIC YOUTH, PIXIES and MY BLOODY VALENTINE and I like to bring it all together. I'm all about sound. That's my thing. Barney, that's his thing. I don't disagree with him, but that's his thing. My thing is the music and the sounds and the sonics. I'd say we balance [each other], I think."

NAPALM DEATH will release a special 2CD, 2LP and digital-download compilation titled "Coded Smears And More Uncommon Slurs" in March 2018 via Century Media Records. This special collection will include a total of 31 songs with a playing time of over 90 minutes, compiling rarities and exclusive earworms spanning 2004-2016 from the whirling gene pool of noise that is NAPALM DEATH.