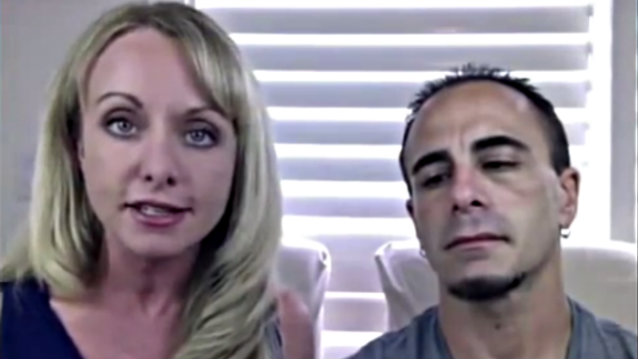 DAN SPITZ's Wife Will Not Press Charges Against Ex-ANTHRAX Guitarist

Candi Spitz, the wife of former ANTHRAX guitarist Dan Spitz, says that she will not press charges against her husband for allegedly assaulting her Christmas morning.

The 50-year-old musician was arrested at the couple's home in Lake Worth, Florida when Candi's mother called 911 to report he was trying to choke his wife.

"I'm not planning on pursuing this in court," Candi, 38, tells GossipExtra.com. "This was a big misunderstanding. My mom should've never called 911."

She adds: "[Dan and I] were separated for a week last year, and Christmas Eve was the first anniversary.

"The stress level at home has been astronomical. Our children are both autistic and Dan may have early onset Parkinson's Disease.

"We were all drinking wine, and he just snapped."

According to Candi, the confrontation happened when her husband started packing her bags, and she stood in his way.

"No matter what's in the police report," Candi says, "he never hit me or tried to harm me. He did shove me, and unfortunately I bruised my shoulder.

Spitz spent the night in jail and was released early Thursday afternoon.

The couple, along with their 7-year-old twins, was spotted at Zoo Miami this afternoon, according to GossipExtra.com.

Dan Spitz is a born-again Christian and Messianic Jew and in interviews has frequently cited his faith as an influential component to his life.