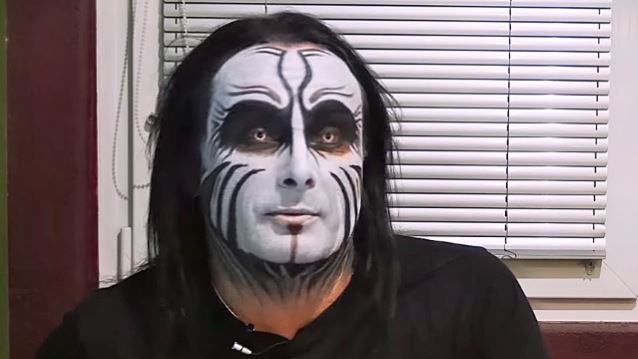 DANI FILTH On Next CRADLE OF FILTH Album: 'It's A Cross Between 'Hammer Of The Witches' And 'Cruelty And The Beast''

Anthony Morgan of Metal Forces recently conducted an interview with CRADLE OF FILTH and DEVILMENT frontman Dani Filth. A couple of excerpts from the chat follow below.

On changing drummers in DEVILMENT, and the musical style of new DEVILMENT album, "II: The Mephisto Waltzes":

"It was very amicable, the split with Aaron [Boast], because Aaron, our previous drummer, was moving house, and had a new job, and a lot of other commitments. So, he passed over the baton to Matt [Alston]. He actually found Matt for us, and I still play soccer with… Well, not at the present because he's broken his arm… But I still play soccer and go drinking etcetera with Aaron. So, as I said, very amicable. Obviously, we played on our strengths with the writing from the first record, but most of the record… Well, half of the record — 'The Great And Secret Show' [2014] — was already written before Lauren [Francis, keyboards and vocals] and Colin [Parks, guitars] came onboard. With this album, they were there from the beginning, and so I think that's why we see a stronger performance from both people. Yeah, it's just bigger, better, darker, and more gothic. It's more experimental, but not so experimental that it's drifted away from what people expect of DEVILMENT. I mean, it's not chalk and cheese between both albums.

"Like I said, we played on the strengths. There's a lot of the groove and the heaviness and the catchy choruses carried over, but we have obviously… I mean, songs like 'Hitchcock Blonde' and 'Dea Della Morte', 'Shine On Sophie Moone' and 'Full Dark, No Stars' etcetera are very different from one another, henceforth why we released three singles prior to the album. One song doesn't really do the album justice. The material's quite eclectic, do you know what I mean? If we just released 'Under The Thunder', people would be expecting the whole album to be nine or ten songs of that, so I think by releasing 'Hitchcock Blonde' and 'Full Dark, No Stars', it gives you quite a good window into what the album is about."

On the lyrical themes of "II: The Mephisto Waltzes":

"The title is inspired by Franz Liszt, who basically wrote four piano pieces which concern themselves with the story of Faust. Faust is a guy that sold his soul to the Devil, and tried getting it back. 'The Mephisto Waltz' is also an American horror movie (1971),which took its title from the work of Franz Liszt as well, and is also a track by the MISFITS. It works very well with the artwork by Elena [Vizerskaya]. You've got this woman on the front who seems to be doing this sort of strange tarantella, almost this dance of death. It suggests that all of the tracks on the album are linked to devilish endeavours, hence the band being called DEVILMENT. At heart though, it's essentially about dark emotions that are overcome.

"You've got 'JudasStein', which is about justice, and this creature being a magnet for all the sins of the world. Then you've got 'Hitchcock Blonde', which is pretty self-explanatory — about infatuation. You've got retribution, you've got oppression, obsession, fanaticism, death. You've got all of these very dark emotions that underline and underpin the record, but I think the record is very cathartic, as in it's about a process. It's like being in a cocoon, to come out better on the other side. It's about overcoming all of these bad feelings, and then coming out positive on the other side. About overcoming depression, overcoming infatuation, or dealing with it, etcetera, etcetera. The process of writing that was cathartic in itself, because it is about getting all of your demons out — your musical demons out, your lyrical demons out — and cleansing yourself."

On the musical style of CRADLE OF FILTH's next studio album:

"From what I do know, it's a cross between 'Hammer Of The Witches' [2015] and 'Cruelty And The Beast' [1998]. It's very melodic, very fast… Well, it's not all fast. There's some big, heavy tracks on there. Very ornate. There's some great fucking riffs on there, amazing. Yeah, can't really speak much about CRADLE. Obviously, it's not a CRADLE interview. That will come in time."

On CRADLE OF FILTH's next studio album being released in September 2017:

"It's gonna be delivered the second week of May, and the reason for… I mean, it's not being pushed out or anything like that. Whatever we release, it's usually about two years afterwards. I think it's just the fact that I've got another band makes it look like it turns around quite quickly, but it has to be released in September because of new management planning this big world tour which has to start in America on a certain date. So, the album has to be delivered and released… It all has to fall into a certain place. You can't just go 'Oh, we missed our deadline. Sorry,' because otherwise, you miss your slot with releasing and with the record company, and everything they've got planned. So yeah, we're free to do what we want for a certain amount of months, but then it all has to fit into a schedule."