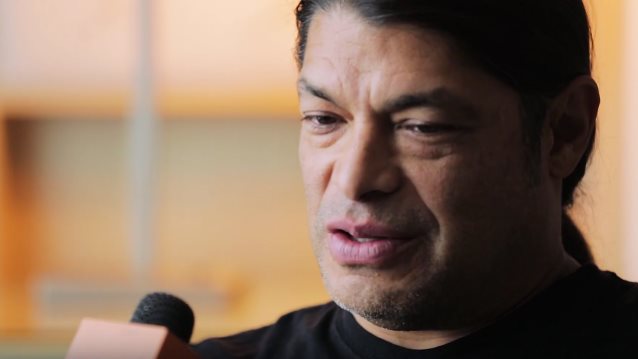 Before an intimate charity show at Toronto's Opera House this week, METALLICA bassist Robert Trujillo revealed to Exclaim! TV 's Aggressive Tendencies that he had written the opening instrumental section of the band's new song "ManUNkind" in memory of METALLICA's legendary bass player Cliff Burton. In the beginning of the song, Trujillo deftly fingerpicks a melodic bassline alongside James Hetfield's clean guitar, reminiscent of Burton's own solo bass sections.

"When I had written that, I was definitely thinking about Cliff," Trujillo said. "In a way, that to me is a tip of the hat to Cliff Burton and the spirit of Cliff. If you hear that little thing before 'ManUNkind', for me personally, that was with Cliff in mind."

METALLICA drummer Lars Ulrich recently spoke to Seattle's KISW 99.9 radio station about the 30th anniversary of the tragic loss of Cliff Burton when METALLICA's tour bus skidded on ice while the group was on tour in Scandinavia and Cliff was thrown out the window and crushed. Lars said: "We were so shocked and stunned that we didn't know what hit us. And, like most, I guess, kids in their early 20s who get ambushed with that type of thing, we jumped into a bottle of, in this case, vodka, for me, and stayed in there for quite some time. We weren't mature enough or seasoned in life enough to know how to deal with this other than just to sort of, basically, almost hide behind the alcohol and compartmentalized it. So the next few months were very difficult, and it was crazy, but we just put the blinders on and started auditioning bass players. And we knew in our hearts that Cliff would be the first one to kick us in the ass and tell us to keep going, if he could see us mope. And so there was no moping; we just kept going the best we knew how to."

Following the "Load"/"Reload" albums and tour, METALLICA went into a tailspin that resulted in the exit of bassist Jason Newsted, Hetfield spending the better part of a year in rehab and the band nearly splitting up.

METALLICA returned to a heavier style more reminiscent of its early albums on 2008's "Death Magnetic", while its new disc, "Hardwired... To Self-Destruct", arrived last month.