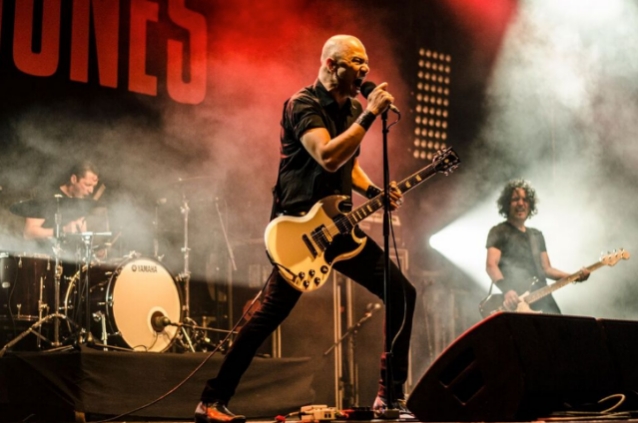 Having just completed the first leg of an extensive European arena tour with VOLBEAT, DANKO JONES has announced several shows in California that will take place in February — the acclaimed Canadian trio's first American concerts since the release of its latest album, "A Rock Supreme". Support at each of the performances will be provided by the long-running Los Angeles hard rock act JUNKYARD.

Since the April release of "A Rock Supreme", which was produced by Garth "Gggarth" Richardson (RED HOT CHILI PEPPERS, RAGE AGAINST THE MACHINE, RISE AGAINST, BIFFY CLYRO),DANKO JONES has toured extensively around the globe, but the February dates with JUNKYARD represent the first leg of what is expected to be the group's most extensive American tour in several years.

DANKO JONES recently released a music video for the album's latest single, "Fists Up High". The track has been a staple of DANKO JONES's recent live performances, and the group plans to continue playing the song when their European tour with VOLBEAT resumes in Warsaw, Poland on October 29. In addition, guitarist/vocalist Danko Jones will continue to join VOLBEAT to perform their recent hit "Black Rose", a song to which Jones contributed guest vocals.

DANKO JONES has made a name for its over the years as a must-see live band during memorable tours with the likes of GUNS N' ROSES, MOTÖRHEAD and CLUTCH. The group's best-known material includes "Had Enough", which earned the group their first gold and platinum singles in Sweden and has racked up more than 14 million Spotify streams; "Gonna Be A Fight Tonight", which WWE used as the official theme song of the 2015 Royal Rumble; and "Lovercall", their first of seven singles to crack the U.S. Active Rock Top 40.