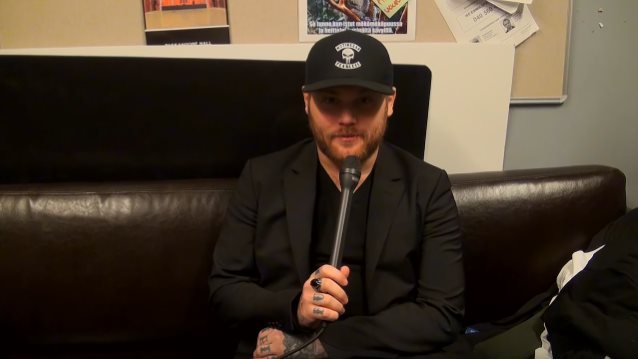 Danny Worsnop says that he doesn't have any interest in becoming a legal member of ASKING ALEXANDRIA again, preferring instead to arrange his tours and recording sessions with the band one at a time.

The reunion between Danny and ASKING ALEXANDRIA was confirmed last October following weeks of rumors and speculation regarding the status of his replacement, Denis Shaforostov, who joined the band in 2015.

Asked by Finland's Kaaos TV on March 20 how how his return to ASKING ALEXANDRIA came about, Danny said (see video below): "They'd approached me asking if I'd do a tour, because they were left without a singer. It was maybe about two weeks out from the actual tour, so I didn't have much time to think. And then eventually I was, like, 'I've got nothing [going] on. Fuck it.' So I went and I did one tour, and then that's turned into two tours. And we're discussing doing more tours now, and then I signed on to do an album. So that's where we're at."

Danny, who released a solo album, "The Long Road Home", in February while still being involved with his other band WE ARE HARLOT in between acting gigs, added that he is working closely with the members of ASKING ALEXANDRIA to ensure that he is able to pursue other projects alongside his touring and recording activities with AA.

"I don't have any interest in becoming a legal member [of ASKING ALEXANDRIA] again, just 'cause there's so many, at that point, complications with my writing with my album and with HARLOT and with other people I work with and my movie schedule," he explained. "At that point, everything becomes very political, and I'd rather it just remain being fun. I mean, it's better for us that way, 'cause we can, as a group of dudes and as Danny Worsnop and ASKING ALEXANDRIA, we can respectfully organize things rather than everyone trying to step on each other's toes and everyone trying to be the most important thing. This way, we can just be, like, 'Okay, you're busy then. We're booking stuff here, 'cause you have nothing going on,' and vice versa."

Worsnop also dismissed speculation that ASKING ALEXANDRIA isn't performing any material from its only Shaforostov-era album, 2016's "The Black", on the current tour because he wasn't interested in singing songs that he had no part in creating. Explaining that it was the other members' decision to not play those songs, he said: "I've brought it up to 'em. I said was, like, 'I haven't heard any of it. I don't know what the singles are. Let me know what you guys need me to sing for that stuff.' And they said they don't wanna do it."

Danny added that he "wouldn't have cared at all" about throwing in a couple of songs from "The Black" into the set. He said: "Obviously [the older] songs I have a close connection to, but at the end of the day, it's a set full of songs I've written. If there were a couple of songs that I hadn't written, it wouldn't bother me. I mean, I'm getting paid the same at the end of the day anyway, I'm gonna have just as much fun on stage, I'm gonna have the same experience and I'm gonna put on the same show for the fans. So whatever they want me to play, I'll play. At the end of the day, I'm here to do a job and I'm here to sing songs and put on a great show and to entertain everyone. And whatever it takes to do that is what I shall do."

ASKING ALEXANDRIA guitarist Ben Bruce told Kaaos TV last week that the band has already completed the songwriting process for its next album, with plans to enter the studio in the coming months.

When Danny's return to ASKING ALEXANDRIA was first announced, Bruce said in a video message that Shaforostov had "just stopped talking to us." But Denis later tweeted, "I left AA because I can't be in a touring band at this point in my life. There's no drama and I don't want to be a part of it."