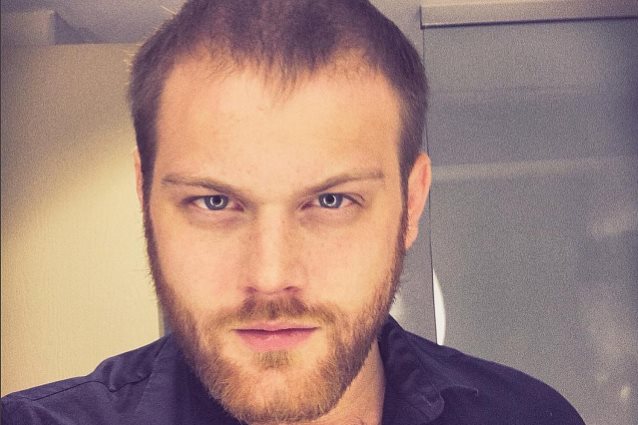 DANNY WORSNOP Says It's 'Good To Be Back' With ASKING ALEXANDRIA, But Insists His Solo Work Is His 'Number One'

Metal Wani's Barrett Stephens recently conducted an interview with ASKING ALEXANDRIA frontman Danny Worsnop. You can now listen to the chat in the YouTube clip below. A couple of excerpts follow (transcribed by BLABBERMOUTH.NET).

On how his return to ASKING ALEXANDRIA for last fall's "10 Years In The Black" tour was received by the fans:

Danny: "They received it very well. I mean, it was incredible — the response from them and the support. I couldn't have been happier. It was a great experience. It's always nice to hear a few thousand people chanting your name every night. I didn't need the ego boost, but it was welcomed. It was great to be back with the guys. It had been, like, two years since we had spoken, so it was… it was nice. It was like jumping back in, and it was a smooth transition that I'm glad we did. I think we all needed the time apart to gather ourselves and get our respective shit together. And yeah, it's good to be back together."

On whether there will be more solo albums in the future to follow this year's "The Long Road Home":

Danny: "The solo work is my number one, always. I'm already thinking about the second one. Everything else… I obviously love all the other things I do, but the solo record is always number one. 'Cause it's me and I have an emotional connection to it where nothing can ever top it."

On his plans for the coming months:

Danny: "I'm gonna be touring [in support of the solo album]. I just shot four new music videos, and they're gonna be coming out. Tour as much as possible. I have two movies coming out this summer, one of which I'm writing all music for, so I'm in the middle of writing that still. There will be a point where I fly out to finish up [the second WE ARE HARLOT album], which I'm very excited about. We're ten songs into that already. Then… What's after that? More touring. Just touring this record as much as possible."

"The Long Road Home" will be released in February. The effort sees a slight musical departure from Danny's previous work with ASKING ALEXANDRIA, with the singer saying about the disc's direction: "I'm still, for the most part, singing the blues. But I went into it with country in mind."

ASKING ALEXANDRIA drummer James Cassells recently said that the band is planning on entering the studio later this year with Danny to begin work on new material as a follow-up to "The Black" album.

The reunion between Danny and ASKING ALEXANDRIA was confirmed last October following weeks of rumors and speculation regarding the status of Worsnop's replacement, Denis Shaforostov, who joined the band in 2015.

ASKING ALEXANDRIA guitarist Ben Bruce said in a video message that Shaforostov had "just stopped talking to us." But the singer later tweeted, "I left AA because I can't be in a touring band at this point in my life. There's no drama and I don't want to be a part of it."

For his part, Worsnop said about the reunion, "I'm now in a place mentally where this is something I can embrace again, with the men I started this crazy journey with."