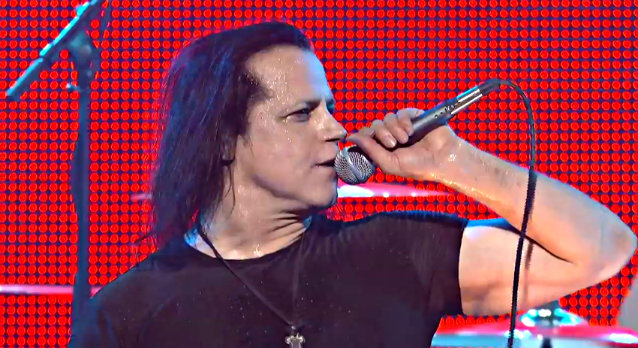 All post work on Glenn Danzig's "Danzig Legacy" TV special — which was filmed in May 2012 in Glendale, California with director Mark Brooks (Adult Swim's "Metalocalypse") — is now complete. Brooks and Danzig have finished all editing and post EFX and "it came out epic," according to a posting on Danzig's official Facebook page.

In an April 2013 interview with Full Metal Jackie, Danzig stated about the "Legacy" TV special: "The 'Legacy' TV special was an idea that was brought to me and it was an idea that Mark Brooks had; he does 'Metalocalypse'. It was basically to do like a DANZIG 'Legacy' TV show loosely based on the Elvis [Presley] '68 Comeback special; it revisited a lot of his past and a lot of stuff. So we did that with the "Legacy" TV show, which is almost done now. It was performance pieces that I do, then there's the band playing live, we do [songs from] DANZIG, SAMHAIN. Then for the MISFITS thing, we did what Elvis did when he sat down with Scotty Moore and the Memphis Mafia and we just did them all right there live, sitting and everyone's around us; there's no backstage, we're just on a little podium in from of everybody. And so we did a bunch of MISFITS songs and Steve [Zing] was just playing on a cylinder or something; it was pretty cool. We were doing the 'Legacy' shows anyway around that same time period, so we just thought we'd put it on film while everybody was there."

He added: "Especially when we were doing the shows, and then going and doing the TV special with the very intimate audience, it was really cool just seeing how much the music affected all of the people that are really into it. It's so many different generations of fans. It put a really cool perspective on it, and I think everyone's going to enjoy it. I know the people that were there really enjoyed it. I think I'm playing one of the songs and my tooth falls out, like a cap or whatever it is like in the middle when I'm about to sing. I'm, like, Hey, my fucking teeth fell out,' so it's just stuff like that that's just happening spur of the moment because it's live."