You know it's Glenn Danzig the moment you hear him.

It's not just that inimitable voice either. It's the thick airy guitars, bluesy swagger, and "come hither" evil that placed him at the forefront of a number of musical revolutions. Due to his ingenuity, horror and punk formally collided with the MISFITS' genesis in the seventies. Anytime you see that iconic MISFITS skull, you'll immediately think of his howl fueling punk classics like 1982's "Walk Among Us" or 1983's "Wolf's Blood/Earth A.D." His vision for SAMHAIN and albums such as "Initium" and "November-Coming-Fire", to name a few, indelibly impacted the landscape of extreme music, fortifying the crossroads between heavy riffs and occult imagery so prevalent these days. Then, there's his eponymous band — DANZIG. 1988's self-titled debut would go platinum and yield classics including "Mother", "Twist Of Cain" and "She Rides", while overall sales across his catalog exceed 10 million worldwide to date.

Moreover, you can consistently feel his presence throughout pop culture, whether it's his music soundtracking moments in "Hangover" film series, at the personal request of director Todd Phillips, or artists ranging from Johnny Cash and Roy Orbison to GUNS N' ROSES, METALLICA, MY CHEMICAL ROMANCE and many more recording his songs. That imprint expands further with his successful Verotik comics and forthcoming feature film directorial debut. However, Danzig wants to show you where it started with his tenth full-length album and first since 2010's "Deth Red Saboath" — "Skeletons", due on November 27 via Evilive/AFM.

A labor of love that dates back to 1979, "Skeletons" sees Danzig pulling back the curtain behind his influences with a collection of ten covers spanning artists as diverse as Elvis Presley, ZZ TOP, and AEROSMITH to BLACK SABBATH, THE TROGGS, THE EVERLY BROTHERS, and more. Recording intermittently between 2012 and 2015 in Los Angeles, he reveals the bone structure for his own style.

"These are my skeletons," he affirms. "You may or may not know that I dig these songs. You could say that some of this music is the actual basis and skeleton of what I listened to growing up — ultimately informing the kind of music I like. It's the foundation. If you took Elvis and SABBATH out of my life, I probably wouldn't be the Glenn Danzig you know! I'm glad both sides are represented on this record."

Among the tracks, he takes Presley's "Let Yourself Go" from the film "Speedway" and transforms it with a swinging distorted stomp and bluesy vocal crescendo. "I thought it was a song I could do something really cool with," he says. "It's also something that I didn't think anyone would necessarily expect. When you tell them you're going to do an Elvis cover, they expect something they know. Not a lot of people know this one. It's actually on the ''68 Comeback Special', and it's worth going back to."

He also "Danzig-ized" SABBATH's "N.I.B.", beginning with just guitar, vocals, and half-beat drums bolstered by ominous church bells. Meanwhile, AEROSMITH's "Lord Of The Thighs" grows exponentially heavier in his hands with a swell of pinch harmonics and robust riffing.

"People might be surprised I like that second AEROSMITH record, 'Get Your Wings'. There are tracks on there, especially 'Lord Of Your Thighs', that stand out to me. However, if you hear theirs and then you hear ours, ours is much heavier," he grins.

A rousing cover of THE LITTER's "Action Woman" opens a window into his pre-punk and garage roots, while Danzig brings a blast of intensity to ZZ TOP's "Rough Boy", turning it into a metallic freight train. "I always thought it was such a great song," he continues. "I wanted to make it more linear and run all the way through."

THE TROGGS' "A Girl Like You" becomes a punkified juggernaut in his hands with its fuzzed-out guitars, pounding drums and the trademark Danzig sing-a-long choruses.

He captures the rebellious spirit of the sixties outlaw biker films with a punked-out take on "Devil's Angels" from the "Devil's Angels" soundtrack complete with his old school MISFITS Dallas Arbiter Jumbo-Fuzz Pedal. Then, Danzig adds a countrified spark to "Satan" from "Satan's Sadists", which, he assures, "You might be surprised, but I didn't change any of the lyrics. I didn't have to!"

Danzig's interpretation of "Crying In The Rain" from THE EVERLY BROTHERS instantly captivates. Accompanied only by piano, guitar, and tympani, he accomplishes the mission of making it more "ethereal, sparse, dark, and haunting."

Ultimately, "Skeletons" sparks the next phase for Danzig. Helping catalyze his next full-length offering and 2015 tour plans, it's yet another revolution. "I hope people dig it," he leaves off. "I also hope it gives everybody a little bit of insight into the music I listen to and maybe an insight into how I did the songs. If you enjoy it, that's great."

The "Skeletons" cover artwork, featuring Glenn and model Kayden Kross in "Skullface," can be seen below. 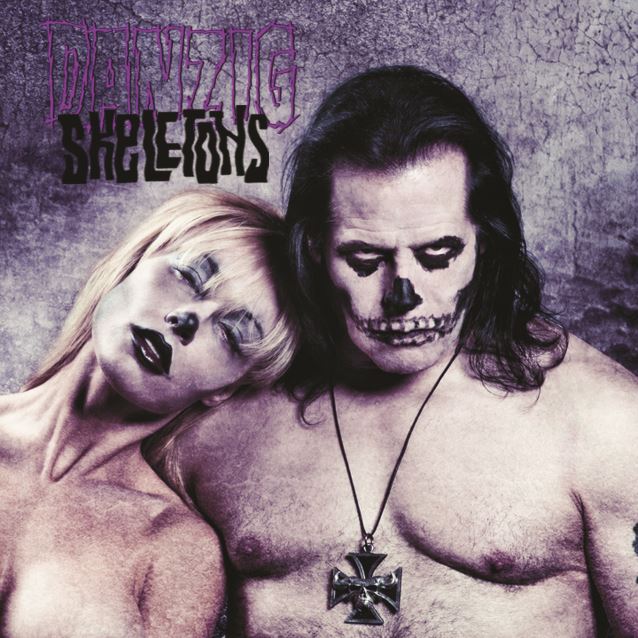