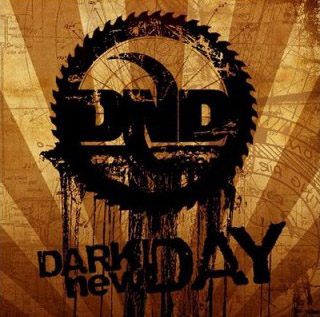 LocalBozo.com recently conducted an interview with Brett Hestla of DARK NEW DAY. You can now listen to the chat below.

"New Tradition", the previously unreleased second album from DARK NEW DAY, will finally be made available on February 28 via Goomba Music.

"We're very excited about the new DARK NEW DAY release," proclaims guitarist Clint Lowery. "It seems the time is right to make these songs public and share with the fans that continue to support this project. We believe this music is still very valid and powerful today, and think its mandatory we give these songs a fair chance out in the music world. We owe it to ourselves and the DARK NEW DAY fans. 'New Tradition' sums up the mindset we were in writing the follow-up to 'Twelve Year Silence'."

DARK NEW DAY released its debut album, "Twelve Year Silence", in June of 2005. The CD was mixed with producer/mixer Ben Grosse, who had previously worked with FILTER, FUEL, SEVENDUST and ALTER BRIDGE. The disc featured the single "Brother" (see video below). The band went on a hiatus after releasing the "Black Porch (Acoustic Sessions)" EP while the members focused on their current projects.

The members of DARK NEW DAY came together in 2011 to compile tracks for this special release to put out as a "thank you" to all the loyal fans that have continued to follow the band and request more material from the group.

DARK NEW DAY may have been new to fans of the bandmembers' previous groups, but it was really a reunion that was twelve years in the making, as the members of DARK NEW DAY literally grew up together. Brothers Clint and Corey Lowery and childhood friend Troy McLawhorn met singer Brett Hestla and drummer Will Hunt while touring as kids in the Southeast club circuit. "We were playing a circuit that had a lot of older people in it, in their twenties, and we were all kids, so we could identify with each other," said Hunt in a 2005 interview. "We really came into ourselves on that circuit," added Corey. "It was like going to rock 'n' roll high school — you'd always try and turn it up because you wanted to impress each other."