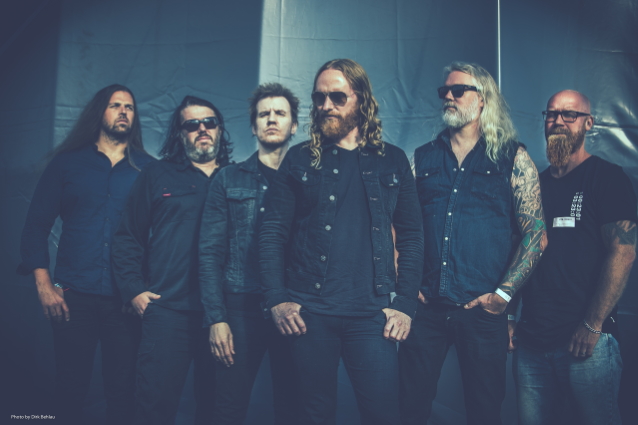 "It's happening again! We are proud to announce that our 12th album, 'Moment', will be released on November 20 worldwide," the band says. "This has been in the works for a long time and we hope this finds you well and gives some sort of respite in these trying times. Crank up 'Phantom Days' and find the best pre-order option. Cheers from the DT camp."

"Moment" will be available as a digipak, black LP, silver LP, and CD jewel case.

It's been four years since DARK TRANQUILLITY's Swedish Grammis-nominated album "Atoma". But the time between was creative, innovative, and adventurous. The band welcomed two top-tier guitarists — Christopher Amott (ex-ARCH ENEMY) and Johan Reinholdz (NONEXIST) — while writing a stunning cluster of songs that not only push DARK TRANQUILLITY's boundaries outward but also strongly typify the Swedes' sonic fingerprint. Recorded at Nacksving Studios and Rogue Music by Martin Brändström and then mixed/mastered by Jens Bogren at Fascination Street Studios, "Moment" is a riveting yet challenging journey from start to finish.

Founding DARK TRANQUILLITY guitarist Niklas Sundin announced his departure from the band in March, explaining in a statement that he "always enjoyed the creative process more than the performance aspects of being in a band, and the required extensive touring held less and less appeal with every album."

In early 2017, DARK TRANQUILLITY released a seven-inch single featuring the two songs — "The Absolute" and "Time Out Of Place" — which had previously only been released as bonus tracks of the limited-edition CD version of "Atoma". These cuts were the most experimental and daring numbers ever from the DARK TRANQUILLITY camp, featuring a very different approach to their usual brand of melodic death metal.