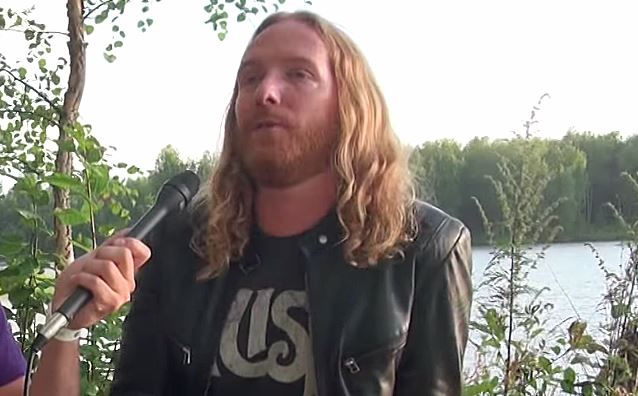 DARK TRANQUILLITY's MIKAEL STANNE Talks Next Studio Album: 'We Have A Lot Of Ideas' (Video)

Kaaos TV conducted an interview with vocalist Mikael Stanne of Swedish melodic death metallers DARK TRANQUILLITY at the Jalometalli festival in Oulu, Finland on August 8. You can now watch the chat below. A couple of excerpts follow (transcribed by BLABBERMOUTH.NET).

On the progress of the songwriting sessions for DARK TRANQUILLITY's follow-up to 2013's "Construct" album:

"[I am] not entirely sure. We have tons of stuff. We have a lot of ideas, and we just need to come together and figure out what to do with it, what direction to go and where to take it. So everybody's been working a lot. And we'll see. We have a couple of more festivals [to play] and then it's time to really have a sitdown [about the next album]. But right now we're really focusing on these festivals and the rest of the shows this summer. So hopefully we'll figure something out by the end of the summer and then we'll start working super hard to get an album out by early next year or middle of next year."

On whether all the members of DARK TRANQUILLITY are involved in the songwriting process:

"It depends. Sometimes Niklas [Sundin, guitar] will write tons of stuff, sometimes Martin [Brändström, keyboards] will write tons of stuff. This time around, I think Anders [Jivarp, drums] has written most of the stuff that we have ready, but it kind of shifts back and forth. But, I think, at the end, it kind of passes through all of our filters and eventually becomes something that is genuinely DARK TRANQUILLITY no matter who writes it."

On when he starts coming up with lyrical ideas for the music that has already been completed:

"I start as soon as some of the songs are finished, so I can get a main idea of what's going on and what direction this is heading. That's when I start writing for real. I already have tons of stuff for whatever will be the next album. But I'm just kind of collecting material right now, making sure that I'm ready once we finish some stuff, and then we can get going for real."

On DARK TRANQUILLITY drummer Anders Jivarp's recent comment that the band's new material is more "guitar-oriented" than that on 2013's "Construct" album:

"Normally, you move on to a new album, and whatever happens is kind of a reaction to your last work. You're thinking, 'What did we do right, and what did we do wrong?' And it's, like, 'Perhaps this needs to change,' or, 'This needs to get better,' or something like that. So it's always, like, you look at whatever went wrong, or whatever you feel, like, 'Ah, this could be better.' Because you constantly try to improve, and you have to learn from your mistakes. So whatever mistakes we did, we will fix and make sure we get better. So we'll see what happens with that."