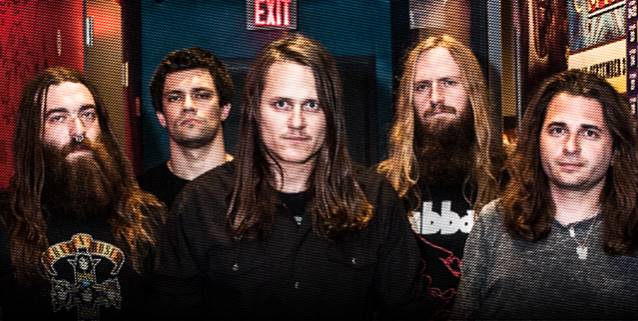 The official lyric video for the new DARKEST HOUR song "Wasteland" can be seen below.

Says the band: "Beyond stoked to release the opening track, 'Wasteland', off of our upcoming release to all of you.

"The new self-titled album is very special to us. We have worked harder on this than anything else in our lives.

"This album explores both new and classic territory and this song is the first movement in that sonic journey. An opening statement for every dead god who worships the living.

"May all your tyrants fall!"

DARKEST HOUR guitarist Michael Schleibaum last August stated about the direction of the group new material: "When John Henry [vocals] and I started the band some 18 years ago, we could have never imagined the sound would travel this far.

"The making of this record (dating back to January of 2012) was both a painful and joyful one and the end result has become something truly transcendent.

"John's work with Taylor on the new demos has proven to be the best he's ever sounded and the introduction of the creative minds of both Travis Orbin (drums) and Aaron Deal (bass) have taken the songwriting someplace otherworldly.

"You can expect a massive evolution.

"The [recent] KILLSWITCH [ENGAGE] tour couldn't have come at a better time for us creatively. It gave us the time and space to think about the album as a whole and really craft something special."

Added John Henry: "To say that writing with Travis has been a metamorphosis is an understatement. His playing style and influence has soaked itself into the soul of the band. His perspective has brought new life into both our writing process and way of thinking.

"Taylor has fresh ears and new eyes on both production and the way people hear music.

"We've recorded with some amazing producers (Brian Mcternan, Fredrik Nordström, Devin Townsend, Peter Wichers) who all in one way or another brought their own spin to the band's sound. However, with these new demos, we hear the potential for a new sonic overhaul and can't wait to dig in and track these final takes."