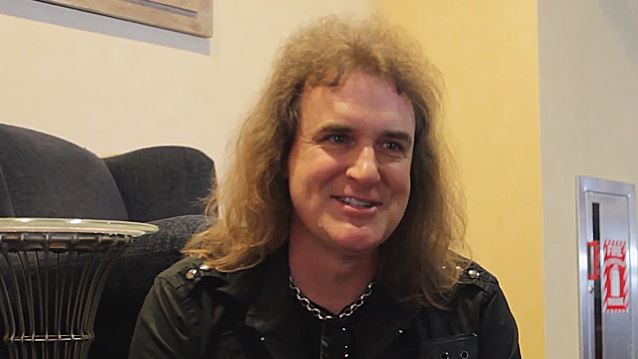 The Ultimate Guitar team of Jamie Gonzales and Carlos Antunez conducted an interview with MEGADETH bassist David Ellefson at last month's NAMM show in Anaheim, California. You can now watch the chat below (video filmed and edited by Erick Bravo and Ivan Heredia).

Asked about the progress of the songwriting sessions for MEGADETH's follow-up to 2013's "Super Collider", Ellefson said: "We have it pretty much written. We need to go in and, obviously, record. And we're looking at lineup things… That's the big question. But that's all moving forward. And we'll know more in the coming days, weeks, and certainly as the record's being made, that will tell more. I mean, to me, the record has to be great, and that will determine, I think, from that, where the lineup goes."

Ellefson also spoke about the possibility of a reunion of MEGADETH's "Rust In Peace" lineup, featuring Nick Menza on drums and Marty Friedman on guitar. He said: "We're very aware of what a lot of people are hoping we do. And I've connected with Nick over the last few years, last couple of years, especially at NAMM, and Marty's always been a friend. He lives way on the other side of the world [in Japan], Marty."