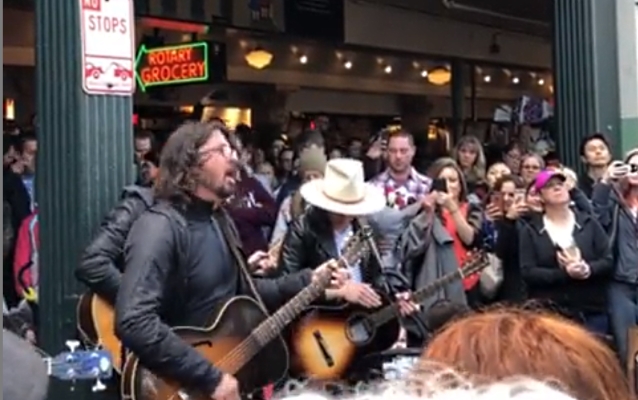 According to The Pulse Of Radio, FOO FIGHTERS mainman Dave Grohl and folk singer-songwriter Brandi Carlile delivered a surprise performance on Saturday (April 20) in Seattle, playing a brief set that included a rendition of THE BEATLES' "Let It Be".

The musicians reportedly busked for 15 to 20 minutes in the city's Pike Place Market, closing their jam session with FOO FIGHTERS' "Times Like These". The pair were backed up by Carlile's twin backing guitarist/vocalists, Phil and Tim Hanseroth.

Carlile posted the first few minutes of their set to her Facebook page, later writing on Instagram: "Got nostalgic and decided to swing by my old busking spot at Pike Place Market with the twins and Dave Grohl…honestly one of the most surreal moments of my life."

Grohl and FOO FIGHTERS have been off the road while Grohl recovered from arm surgery, forcing the band to cancel a pair of February shows in New Orleans. The gigs have been rescheduled for next month, with a number of summer festivals also on the FOO FIGHTERS' itinerary.

Busking at Pike Place Market. Right where it all started so many years ago. Super special guest: Dave Grohl.

Got nostalgic and decided to swing by my old busking spot @pikeplacepublicmarket with the twins and Dave Grohl...honestly one of the most surreal moments of my life. 😭🤘 Thanks guys ❤️✊ @timhanseroth @phil_hanseroth