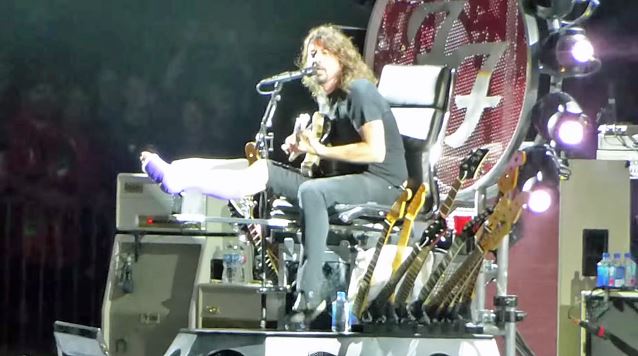 According to The Pulse Of Radio, FOO FIGHTERS frontman Dave Grohl has been making a little news at each stop on the band's current North American tour, and today's item comes from the band's recent show in Calgary, Alberta, Canada. This time, Grohl called out bands who play two hours or less onstage, telling the audience, "You don't want one of those little hour-and-a-half-long shows, do you? You don't want that shit. All of those new bands that play those little two-hour concerts, you don't want that shit. Two hours and 15, I don't think is enough. Two and a half hours, does that sound okay? That's not enough, is it?"

Grohl added: "Here's our fucking problem. We've been a band for 20 fucking years, we have a lot of fucking songs, and then add my big mouth on top of that, and we're going to be here all night."

FOO FIGHTERS are known for regularly playing three-hour concerts, but drummer Taylor Hawkins admitted a while back that they can be a challenge. "It's a lot," he told The Pulse Of Radio. "I don't know how long we can keep that up. We'll see. I don't know how long Dave's gonna be able to sing for three hours every night when we get onstage. It's awesome and it's fun and it's the macho trip a little bit, and people get their money's worth, that's for damn sure."