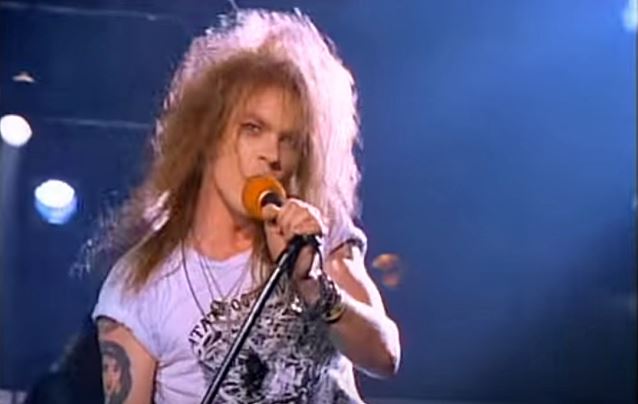 The First Of Many GUNS N' ROSES Reunion Rumors

Now that Slash has revealed that he and former GUNS N' ROSES bandmate Axl Rose are friends again after nearly 20 years of estrangement, you can expect a steady stream of rumors about where and when the seemingly inevitable GUNS N' ROSES reunion tour will take place. The first has now popped up via The Pulse Of Radio, which reports that a club owner in Australia has received some intel.

The owner, James Young, told Triple M Radio: "I heard the most amazing rumor this week, from a very well-informed heavy hitter in the Australian music industry, giving me the name of the headline act for Soundwave next year… So what mega band could it be? Well I have 'fantasized' on Wednesday night that it will be: Steven Adler, Izzy Stradlin, Duff McKagan, Slash and Axl Rose, the reformation of the original 1987 'Appetite For Destruction' GUNS N' ROSES lineup."

Soundwave is an annual touring rock and pop festival that travels around Australia and New Zealand during those countries' summer months in January and February.

Slash confirmed last Friday (August 21) in a Swedish TV interview that he and Axl were on friendly terms again, saying: "It was probably way overdue, you know. But it's…. you know, it's very cool at this point. You know, let some of that, sort of, negative… dispel some of that negative stuff that was going on for so long."

Asked if the thawing of his friendship with Axl could lead to a reunion of the band's classic lineup, Slash said: "Oh, I couldn't answer that one," before quickly changing the subject.

Slash told The Pulse Of Radio a while back why he would be open to a reunion. "It would be worth doing for the fans," he said. "The fans would be the greatest thing about it because I think they really deserve it — I think they got the short end of the stick on the whole thing. But the hurdles that one would have to jump in order to make that happen are insurmountable, as far as I can say right at this moment. But I can't speak, you know, for the future to the point of going, 'It'll never happen,' 'cause I think I would sound sort of ignorant."

The closest anyone came to a GUNS reunion in recent memory was when the band was inducted into the Rock And Roll Hall Of Fame in 2012. Three original members of the band, including Slash, McKagan and Adler, showed up, but Axl and guitarist Izzy Stradlin were no-shows.

At the time Slash said in several interviews that the Hall of Fame ceremony gave him a sense of "closure."