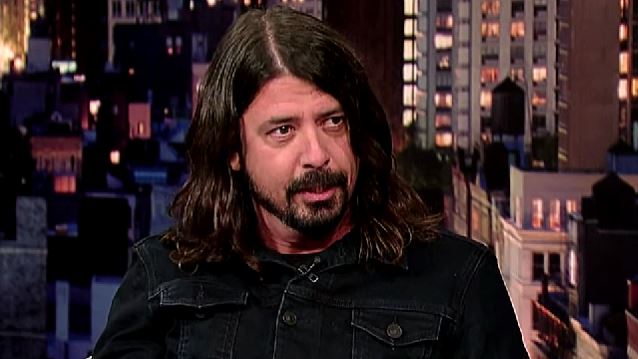 DAVE GROHL: 'I Will Be A Diehard METALLICA Fan Until The Day I Die'

METALLICA will celebrate Record Store Day this month with the release of an exact duplicate of the band's 1982 cassette demo tape, "No Life 'Til Leather". The limited-edition cassette will be available exclusively in independent record stores on April 18. It features artwork copies from drummer Lars Ulrich's own personal copy of the original demo, as well as his handwriting.

FOO FIGHTERS frontman Dave Grohl, who was recently named as the official 2015 ambassador for Record Store Day, told Creative Loafing: "I hear that METALLICA is releasing their first demo tape — on cassette — and that is fucking rad! I bought the first METALLICA album on cassette from a mail-order catalog in 1983. I had never heard of them. I didn't know anything about them other than they had a cool name, and the description said 'thrash metal.' I didn't even know what that meant."

He continued: "I had listened to tons of punk rock music, and I loved MOTÖRHEAD, but thrash metal? That sounded scary and cool. So I sent them my $6 or $7 and a couple weeks later I get this tape in the mail. It was 'Kill 'Em All' and it blew my fucking mind. I will be a diehard METALLICA fan until the day I die because of that experience. It was like someone had sent me the Holy Grail. I was like, 'Ahhh! This is so killer!' So when I heard they were releasing their first demo, I thought, 'Kick-ass! And it's on a cassette, too!' That's going to be a lot of fun.”

Reminded that "No Life 'Til Leather" features METALLICA with Dave Mustaine (now in MEGADETH) on guitar, Grohl said: "Yeah, that's amazing. And what's really great is that you have one of the biggest bands in the world sharing those early experiences with a whole new generation of fans, which is important and cool."

In a statement announcing the "No Life 'Til Leather" release, METALLICA said: "In 1982 we recorded seven songs that became our initial calling card known as 'No Life 'Til Leather', and it led us to our first record deal. The rest, as you some of you may know, is history!" The band added about the new reissue, "We've been digging through the archives, gone to the original source material and re-mastered it to maximize the sound potential for 2015 without altering the original mixes in any way."

The band also promised that expanded editions of the demo, which has never before been commercially available, will arrive on CD, vinyl and in a collector's set later this year.

The seven-song tape was recorded with the first lineup of the band that appeared live as METALLICA, including Ulrich, frontman James Hetfield, Mustaine and bassist Ron McGovney.

All the songs on the tape later appeared on the band's 1983 debut album, "Kill 'Em All", including "Hit The Lights", "Motorbreath", "Jump In The Fire", "Seek And Destroy", "Metal Militia", "Phantom Lord" and "The Mechanix", which was renamed "The Four Horsemen" on the album.

FOO FIGHTERS will begin a massive North American run in Washington D.C. on July 4 — the 20th anniversary of the release of the band's first album.

The band is hitting a mix of stadiums and arenas as it supports the release of its eighth album, "Sonic Highways".